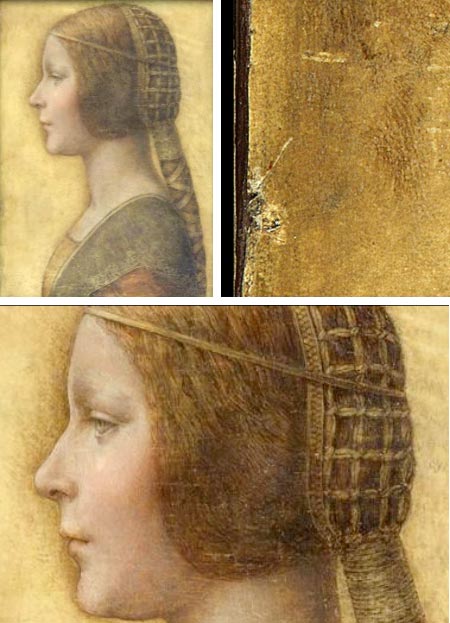 You will sometimes hear talk of the “Van Gogh in the attic”; the thought that somewhere are lost artistic gems, set aside, forgotten or misclassified for some reason, waiting for discovery in a dusty attic somewhere in the back streets of Paris or London, perhaps sitting on a shelf in an antique store waiting for you to pick it up for next to nothing.

You’ll just as often hear that “it simply doesn’t happen”; but, in fact, new works by the world’s great artists are occasionally uncovered, either by actual discovery of previously unknown works or by changes in attribution of known pieces, like the recent re-attribution of Portrait of a Man to Velázquez.

In another case of re-attribution that is unfolding at the moment, a portrait thought to have been by an unknown German artist from the 19th Century has been identified as a work by Leonardo da Vinci. If true, it is a rare find indeed, the first additional work to be assigned to Leonardo in over 100 years.

The rendering, which has been in the hands of private collectors, is in ink and colored chalks. Though some things can be determined about the work by it’s style, such as the left-handedness of the artist, it was not attributed to Da Vinci, or any of his contemporaries. Because of it’s more modern approach (and despite the Renaissance dress of the subject, a young girl shown in profile) it was thought to fit in with stylistic characteristics of a different time and place.

The attribution is being made on the basis of a fingerprint, found in the upper left edge of the canvas (image above, top right), that has been analyzed and matched to another fingerprint in one of the master’s other works. (Leonardo, like many artists, got his hands into his work and left fingerprints in a number of paintings.)

Though the official jury is still out, art historians are falling into agreement that that work is indeed by Leonardo.

There seem to be many more stories covering the discovery in the UK and European press than here in the States (why am I not surprised?), and I’ll provide some links to some of them below. The first one, from TimesOnline, includes a video that has the best close-ups of the piece that I could find. Hopefully, we’ll see more of it in time.

Though most of the stories emphasize the monetary worth of the piece, like some museum level version of Antiques Road Show, the real value lies in what an additional work can tell us about one of the great masters of Western art.