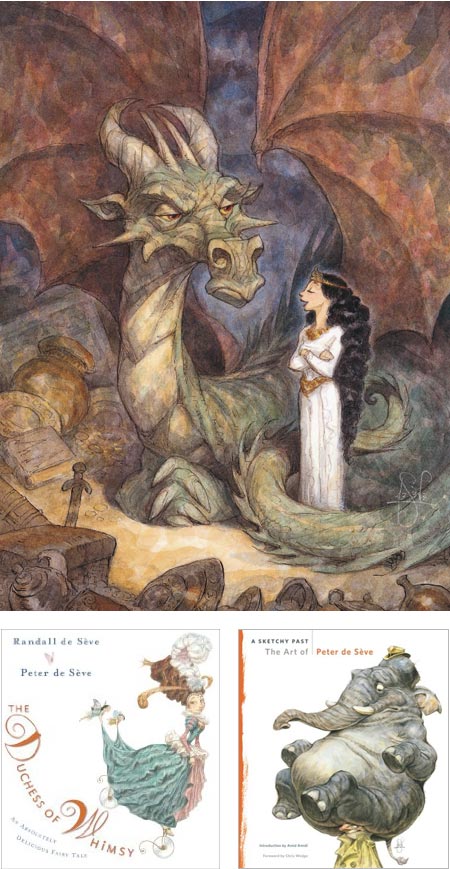 Peter de Sève, a terrific illustrator, New Yorker cover artist and character designer for animated feature films, who I wrote about back in 2006, has a new children’s book (Hooray!), a new blog (double Hooray!) and is the subject of a new monograph (triple Hooray!).

More Hoorays: there is an audio interview with De Sève on Sidebar (look for “Click Here” link at bottom of post), a video interview (conducted by Bobby Chiu) on Imaginism Studios; and word has it that there is a tutorial DVD in the works at Massive Black (no direct info yet).

There is also a nice selection of original art for sale on the Arludik Gallery. The site is unfortunately in frames so I can give you a direct link. Click on his image at top left an follow through the work, drawings first, then color works.

De Sève has a sharp, lively style, springy with confident draftsmanship and sparkling with whimsey. He wields it with aplomb across the range of his endeavors. He deftly captures light, movement, expression and energy in his pen and watercolor pieces, and somehow makes it look easy. His solid background in traditional drawing technique serves him well in his imaginative expressions of wild characters and delightfully loopy animals.

The new book, which I haven’t had the chance to pick up yet, has over 200 pages of full color art, and promises to be a first class treat.

Addendum: Parka, of the always enlightening blog Parka Blogs, was kind enough to point out in this post’s comments the that new monograph is currently available from the publisher, Stuart Ng and Amazon France, and will soon be available from Amazon Canada, but is listed on the U.S. Amazon site with a release date of May, 1010 (go figure).