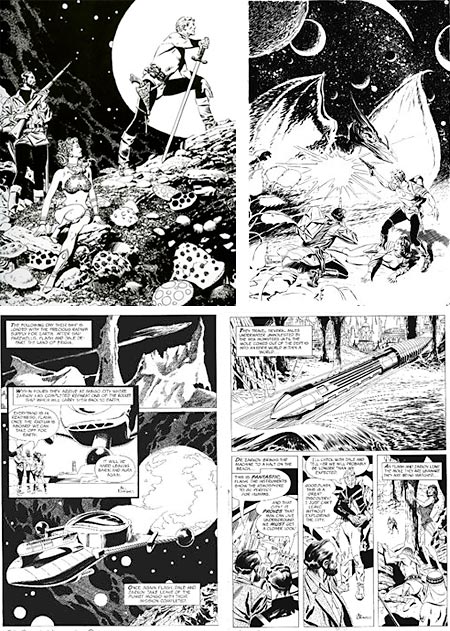 Anyone who has read my previous post about comics art great Al Williamson, knows that he is high on my personal list of adventure comics artists, but I have to admit that even I was surprised by the new book from Flesk publications, Al Williamson’s Flash Gordon: A Lifelong Vision of the Heroic, that collects all of his art for several comic book incarnations of Alex Raymond’s iconic space hero.

I had seen a few of the the stories collected here, but by no means all. The 5 or 6 collections I have of Williamson’s work hinted at even more terrific Flash Gordon pieces by Williamson, with short excerpts and individual panels, but until I got this collection I didn’t realize how consistently amazing his Flash Gordon work was.

In terms of his wildly imagined and intricately detailed science fiction settings, it easily rivals his stunning work for the classic EC Comics stories from the 1950’s, but the sophisticated renderings of figures and faces from some of the later stories bring with them the elegance of his work from the Secret Agent Corrigan strips.

In many ways, Williamson was the inheritor of Alex Raymond’s role as one of the artists who carried the superb draftsmanship and refined pen and ink techniques of the turn of the century illustrators into the 20th Century world of adventure comics

The book collects three periods during which Williamson worked on Raymond’s most recognizable character, from the King Comics stories of the 1960’s, the 1980’s adaptation of the campy motion picture (of which it was by far the best aspect) and the easily missed Marvel Comics miniseries from 1994, as well as including much supplementary and related art in its 256 pages.

I have Williamson’s 1980’s Flash Gordon movie adaptation as published by Golden Books, in which the printing is terrible and the art is lost in sloppy over-saturated color and poor reproduction values in general. I didn’t realize how beautiful the art for that story actually was until I saw the same story printed here in it’s original glorious black and white.

This kind of comic art, when printed in black and white, is like having a book of classic pen and ink illustration that happens to tell terrific pulp adventure stories.

If you look at the pages in the book you’ll see that in many places the black areas are shades of dark gray rather than solid black. This is not because the quality of the printing is in any way off; Flesk Publications is a small niche-publisher devoted to creating superb editions of books about classic illustrators and comics artists, and the standards of book design and printing from Flesk are always high.

Those areas are, in fact, not quite black because the quality of the printing is superb, and the majority of the art has been reproduced not from stats or mechanical copies, as wold be the usual procedure with this kind of collection, but from brand new scans of the original artwork, allowing you to actually see the tones of ink as laid down by the artist! Wonderful.

Mark Schultz, who acknowledges being tremendously inspired by Williamson’s work, was instrumental in working with John Fleskes to assemble the book, and contributes the major essay. There is an interview with Schultz about the collection on Newsarama.

For admirers of great adventure comics art (and I obviously include myself here), Al Williamson’s Flash Gordon: A Lifelong Vision of the Heroic is one of the must have books this year. It can be found in better bookstores and comics shops, or ordered from Amazon and other online bookstores, as well as directly from the Flesk Publications.

For more on Al Williamson, see my previous post.

3 Replies to “Al Williamson’s Flash Gordon: A Lifelong Vision of the Heroic”