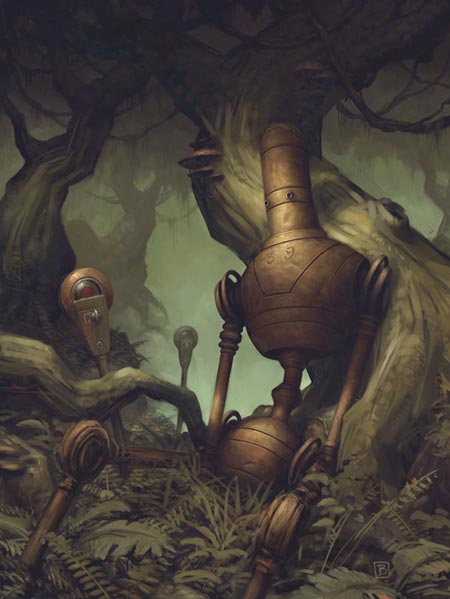 Brian Despain’s world-weary and weather-beaten robots may be the “every robot” in all of us. At times active and engaged, at other times forlorn and seemingly lost, his dented and roughly textured copper-skinned automatons carry a darkly humorous portrayal of our own place amid the natural world.

I first wrote about Brian Despain back in 2006, when I pointed out my admiration for his approach to texture and subtle use of a controlled palette, plus my basic fondness for his original take on most things robotic.

Despain’s work is currently on view in a show at the Roq La Rue Gallery in Seattle, Washington until December 5th, 2009. There is also a page devoted to Despain on the gallery’s site that includes a video interview with the artist.

Despain’s own web site has been redesigned and expanded since my last writing, and there are also new resources elsewhere, including a Facebook page.

You will find some larger images on this blog post about a 2008 show at Roq la Rue.

There is also an iPhone app featuring Despain’s art, that can be appreciated simply as a gallery or used as iPhone wallpaper images, AppShopper review here, and iTunes link here.