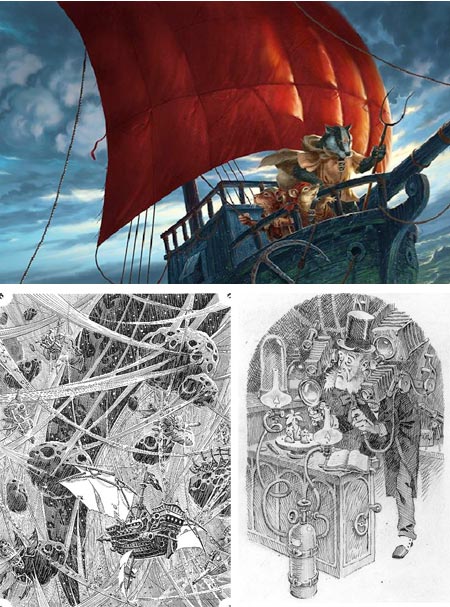 David Wyatt is a UK illustrator known for his fantasy themed work.

He has illustrated books by a number of notable authors, including J.R.R. Tolkein, Terry Prachett, Phillip Pullman, Brian Jaques and Diana Wynne Jones.

After a brief bit of comics work on Tharg’s Future Shock for 2000AD, and a stint in a rock band, Wyatt focused on illustration.

He started working in traditional painting and drawing media, moved into digital illustration, and is now returning to occasional work in traditional media.

I was particularly taken with his pen and ink interior illustrations for Phillip Reeve’s Larklight series (images above, bottom). His intricate style is well suited to the “steampunk” settings of an alternate universe in which space travel is taking place in the Victorian era.

The pen and ink style carries over from his illustrations for The Hobbit and Lord of the Rings.

Unfortunately, Wyatt’s web site is a bit awkwardly arranged. There are sections listed at the bottom of the home page graphic, as well as a “current portfolio”, each of which must be entered separately, and browsing is made more difficult by uncooperative JavaScript thumbnail sliders.

Images in the current portfolio are a bit larger than the others, so you may want to start there. It includes work from his latest book project, Peter Pan in Scarlet by Geraldine McCaughrean.