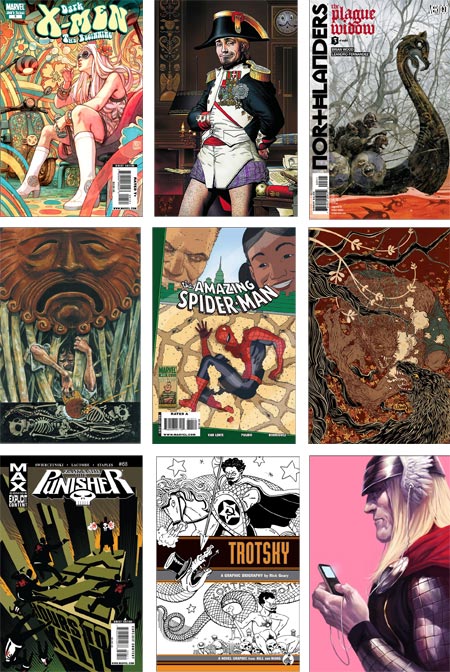 As I pointed out in my 2007 article on Cover Browser, comic book covers have a singular focus: to make you notice the cover, pick up the printed pamphlet or booklet to which it is affixed, slap down your hard earned dollars, and run home clutching it to your chest, cackling maniacally with glee at the prospect of the brain tantalizing wonders that lie within.

OK, well maybe you just put it in a bag, but the main part of that is the slapping down hard earned cash part; and covers have long been considered a crucial element in selling comics (as with any printed material), to the point where specialized artists are often called in to do the cover instead of the art team who created the actual story, and art directors often sweat and fuss over them and ask the artists for repeated revisions.

Comic book covers inherited their traditions in attention getting, sometimes lurid, imagery from the pulp magazines of the early 20th Century; but the art of making arresting comic book covers has become more subtle, and modern “grabbers” often utilize themes and styles that would have been unrecognizable to the sensibilities of the pulp artists and many of the comic cover artists of the late 20th Century.

Here is a list from Kevin Melrose, of the ROBOT 6 blog on Comic Book Resources, of his picks for The 50 best covers of 2009. As always with “best of” lists, it’s a jumping off point for discussion and conjecture, but serves as an interesting cross section of modern comic covers. The covers shown in the article can be clicked on for larger versions.

(See the article for cover credits on the images above.)