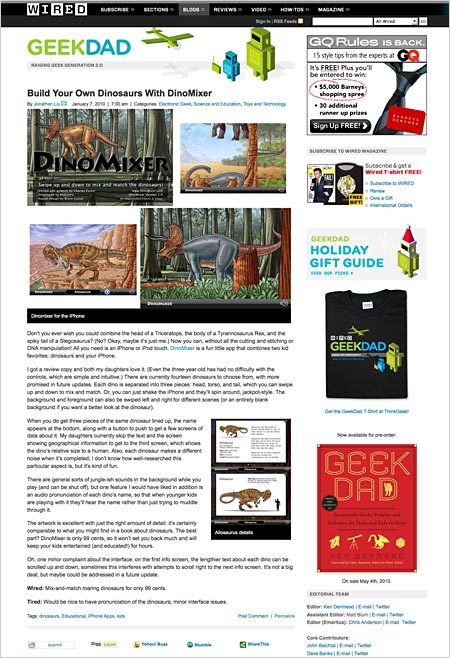 I don’t often talk about my own work here on Lines and Colors, but every once and a while there’s something interesting enough to mention.

I was particularly pleased when I learned that my dinosaur mix and match iPhone app DinoMixer was given a very nice review this morning on Wired.

The review, Build Your Own Dinosaurs With DinoMixer, is by Jonathan Liu and is on Wired’s GeekDad blog. GeekDad is a fascinating and always well written blog about technology, science and related topics, ostensibly aimed at parents, but really of interest to anyone who still has a inner child (grin).

DinoMixer is an iPhone app for which I created the concept, art and design, and partnered with Leon Stankowski of Mobomia, who did the programming.

The GeekDad review was nice not only for the positive comments, but for the helpful suggestions (like adding an audio pronunciation of the dinosaur names). Creating something like an iPhone app is in many ways similar to the creation of an individual illustration or other artwork, a process of learning and refinement, constantly striving to get better.

But, also like illustration and other art, it’s nice when you get some positive feedback.