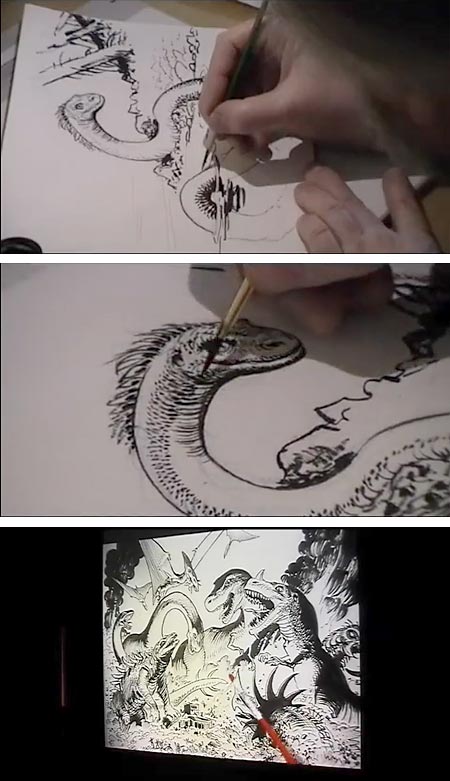 Stephen Bissette is an American comics artist known for his drawings of monsters and dinosaurs and his work on horror comics titles, in particular for several award winning series of DC Comic’s Swamp Thing with writer Alan Moore.

The home page of Bissette’s site serves as a blog, though there is also a specific blog section called MYRANT, and he also maintains an archive of his old version of MYRANT.

There is a Gallery of comic pages, though they are too small to really see his drawing style unless you engage the “Full Screen” mode at lower left of the slide show. There is also a gallery of his original art for sale on ComicArtFans.com.

The current site also includes a new online comic series, King of Monster Isle, and there is a Comic Archive of some of his previous online comics and sketches.

A series of videos from two of Bissette’s CCS lecture/demos are viewable on YouTube (images above, links at the end of this post), in which he demonstrates various comic rendering and inking techniques, including markers, brush and pen. He also shows techniques for working back into inked drawings with white out dispensers and by scratching with razor blades.

The demos include segments in which Bissette works on two of his illustrations for Joseph A. Citro’s The Vermont Monster Guide (more info here). A shorter series of video demos are here on his web site.

One Reply to “Stephen Bissette”