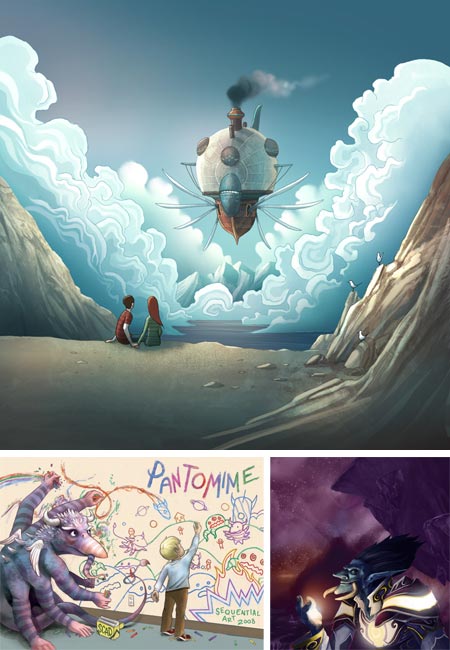 Freelance illustrator and concept artist Jason Caffoe works on a number of projects for which he can’t show or talk about his recent work, but his blog does have some work from older projects, along with engaging images from personal projects.

There is one current project that he can discuss, his contributions as colorist, background painter and concept artist for the second and third books of Kazu Kibuishi’s Amulet graphic novel.

The first two books of Amulet are now available, The Stonekeeper, and The Stonekeeper’s Curse . The third book is still in production. You can see some of the pages from book 2 on this interview with Kazu Kibuishi on Newsarama that also references Caffoe’s involvement with the project. (For more see my posts on Amulet and Kazu Kibuishi.

Among Caffoe’s personal pieces on the blog are landscape concepts, fantasy themed drawings and dinosaurs, a subject always of interest to me (grin). Though his site doesn’t include an online portfolio, one is available in PDF form from links on the splash page or sidebar.

Caffoe is a co-founder with Matt Kohr of the collaborative blog Concept CoOp.

He also contributed to the Terrible Yellow Eyes project that I reported on here, (my post included his piece for the project at top). He was included in the Gallery Nucleus show for the project.

Caffoe’s work is currently part of another group show at Gallery Nucleus, Lift Off: The Art of Airships (image above, top) that runs to February 1, 2010.

Link: http://jasoncaffoe.com
Concept CoOp
Lift Off: The Art of Airships, Gallery Nucleus, to 2/1/10