Your First Print is a rich media eBook by David Bull. Bull is an English born Canadian printmaker, now living in working in Japan, who has an extraordinary devotion to the art and craft of Japanese woodblock printing.

That devotion is evident not only in his own work, but in his study of the art, and in the efforts he has made in assembling and disseminating information about the process. He has presented that information for a number of years in his extensive and highly informative website, woodblock.com, and is now extending that through a series of eBooks as part of a new publishing venture, Mokuhankan.

For background on the artist, his process and work, please see my previous post on David Bull.

Your First Print is an offshoot of the Mokuhankan venture, the primary purpose of which is to publish woodblock prints by other artists. Bull points out that though the devotion to making woodblock prints, a strong tradition in Japan, is very much alive among devotees of the art, the publication and sale of prints has faded. However, those exposed to woodblock prints for the first time are often dazzled by how beautiful they are and and how fascinating they can be.

Likewise, even those knowledgeable about western printmaking may be surprised and fascinated by the differences in the traditional methods of Japanese Woodblock printing. For example, no press is used in making an impression. The traditions of Japanese and European printmaking (which began to cross-pollinate in the 19th Century, see my post on Hokusai), have fascinating parallels as well as divergences.

Your First Print is an elegant and painstakingly crafted electronic book, in rich media PDF format, that introduces the reader to the process, providing an introduction to both those interested in pursuing the art and those who simply wish to deepen their appreciation of the process behind the art.

The eBook is divided into chapters and subchapters, taking the reader through the entire process, from selecting the materials to final printings and even troubleshooting things like misregistration and chipped or damaged blocks.

The text and photographs are supplemented with audio and video files. There are two versions. The downloadable version calls its multimedia files from the internet, the CD-ROM version is self contained. Both require version 9 of the free Adobe Reader in order to access the multimedia content (and convenient drop-down navigation). Those Mac users who, like me, prefer Preview as a PDF reader will need to use the Adobe reader if you want to access the video and audio.

There is a Sample Download PDF available (toward the bottom of this page) that gives you a preview of 24 pages from the the book (“pages” in this case actually refer to horizontal screen-wide spreads). There is also a Support Forum on the Woodblock.com site, in which readers can compare notes, ask questions and generally discuss the process of traditional Japanese printmaking.

In addition to Your First Print, there is a Catalogue of other items, with gems like classic texts by great Japanese printmakers, including Japanese Wood-Block Printing by Hiroshi Yodhida, one of my favorite printmakers. 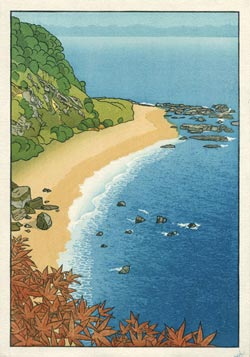 For more on David Bull’s own work, you can view a number of his print series on the site, including his Hanga Treasure Chest small print series and the 12 prints for My Solitdes. The latter has a fascinating companion page, in which you can view interactives that allow you to click through the stages of printing impressions for the individual pieces. It is in pieces like these that I enjoy Bull’s work most, where European and Japanese visual traditions meet and blend, as in the image at left, The Seacoast in Autumn (original here).

For more on traditional Japanese woodblock prints, see some of my previous posts on Hiroshi Yoshida, Kawase Hasui, Katsushika Hokusai, Ito Shinsui, Utagawa: Masters of the Japanese Print 1770-1900 at the Brooklyn Museum and Exquisite Visions of Japan.

4 Replies to “Your First Print: a introduction to Japanese Woodblock Printmaking”