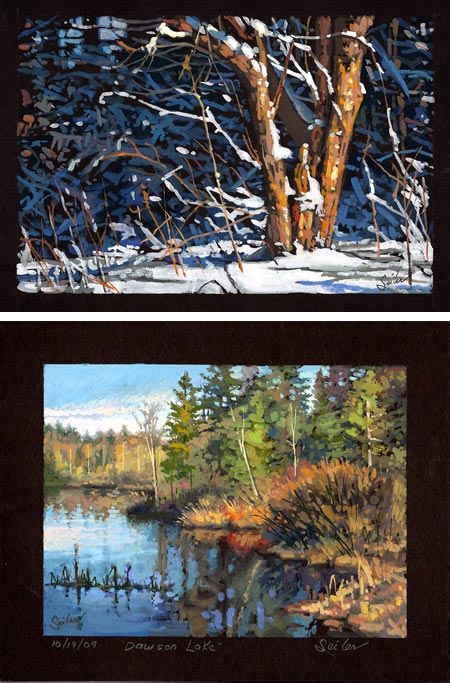 Gouache is a medium that doesn’t get its due. Often looked on as a “less than” subset of transparent watercolor, or a “wannabe” substitute for oil, gouache has some of the characteristics of each.

Gouache is a form of watercolor, pigment suspended in gum arabic, and does give the ability to work in light over dark like oil and unlike transparent watercolor. Most importantly, though, gouache has its own character, allowing the artist to produce smooth, even tones, distinctive color and impart a graphic character to brushstrokes that can give gouache a unique visual appeal.

Larry Seiler worked for 17 years in acrylic and another 15 in oil, and though he apparently still works in both, he now prefers gouache for his small immediate paintings of the Wisconsin landscape.

Seiler’s colorful landscapes are often painted on black board or black prepared surfaces, and he frequently paints in an inset area, leaving part of the surface around the edges.

His gouache paintings are rendered in bright dabs of color with little blending, giving them a simultaneously painted and graphic feel. His compositions often include small streams of lakes and bright foliage, subjects that lend themselves well to the application of broken color.

Seiler has a web site on which you can find examples of both his small paintings and larger studio work, but it is on his blog that you will find the small gouache paintings.