Russian born Timur Akhriev attended middle school and high school at the St. Petersburg Art School. In 1991 he left the politically unstable region near his hometown of Ingushetia, near the border with Chechnya, to join his father, painter Daud Akhriev, in the United States.

He now resides in Chattanooga, Tennessee, where he attended the University of Chattanooga Fine Arts program. From 2005 to 2007 he studied in Florence, Italy, for a year and a half at the Florence Academy of Art. You will find a number of scenes of Florence, particularly some wonderful depictions of the characteristic Florentine tile roofs, among the pieces in the galleries where he is represented.

Akhriev has a direct, painterly approach, honed by plein air painting, with a rich variety of textures, vibrant colors and a range of tonal effects. Many of his works are evocations of late afternoon or early evening light, in which foreground objects are often in shadow, and background elements illuminated by shafts of slanting sunlight.

Despite his lack of formal art training, Victorian painter John Anster Fitzgerald became accepted by the Royal Academy, exhibited at the British Institution and established himself as well-known portrait painter and illustrator.

However, “Fairy Fitzgerald” earned his nickname as a “fairy painter”, a popular niche genre in Victorian painting that focused on the depictions of fairies and their otherworldly kin, and the sometimes escapist and imaginative settings evoked by the literature from which the ideas are derived.

One might imagine that this was in some ways the Victorian equivalent of the appeal of contemporary fantasy art, which has revisited related themes with regularity.

Fitzgerald’s take on the subject, though whimsical in some respects, was often darker than that of his contemporaries, with influences from Bosch and Brueghel raising their twisted little heads amidst the flowers and moss of the forest floor.

In some ways, this is an appropriate undercurrent for the subject, given the often dark and grisly nature of many of the original fairy tales and folklore that were the basis for the motifs.

Fitzgerald utilized brilliant color, strong value contrasts and richly textural detail to give his work a visual appeal much suited to his subjects and the appetites of his audience.

His work experienced a revival in the 20th Century, to the point where forgers were discovered to be creating numerous fake Fitzgeralds.

Fawcett was active in the early middle of the 20th Century, a time when the role of photography, and the shifts in fine art, were dramatically changing the look and feel of illustration.

Like many of his contemporaries, Fawcett de-emphasized rendering, focusing instead on the composition as a whole, the drama of the scene in relation to the page on which it was printed and the surrounding or incorporated type, and the visual appeal of passages of intense texture against more open areas.

He did not, however, abandon the fundamentals of draftsmanship and expressive drawing that carried forward from the traditions of the Golden Age illustrators and the 19th Century academic art from which they evolved.

Fawcett’s use of subdued color may have had something to do with the fact that he had a form of color blindness (often relying on his wife’s guidance in the application of color), but it was also from his emphasis on a solid foundation of value as the basis for a composition.

Even Fawcett’s more highly rendered illustrations contain an overt element of drawing, with linework evident in the architectural backgrounds if not in the figures. Many pieces have a feeling of painted drawings, and were in fact done that way.

He had an interest in art form an early age. Encouraged by his father, who was an amateur artist, he was apprenticed to an engraver, and spent most of his earnings buying magazines to study the illustrations. Fawcett was born in London, moved to Canada with his family and then to New York. He returned to London to study at the Slade Art School.

He began his career studying to be a gallery artist, but was bitterly put off by what he saw as petty politics, infighting and posturing of the fine art milleu. He decided to devote himself to commercial art, which he saw as more honestly straightforward in its intent.

He had great success creating illustrations for magazines like The Saturday Evening Post, Holiday, Cosmopolitan and numerous advertising clients. His most famous illustrations were a terrific set of 12 Sherlock Holmes illustrations for stories written by Conan Doyle’s nephew Adrian Conan Doyle and John Dickson Carr. The first of these ran in Good Housekeeping, and the others were published in Collier’s Weekly (image above, bottom). In his later career Fwcett devoted himself to documentary style reportage for Look magazine.

Fawcett himself wrote a well regarded book, On the Art of Drawing, which is still in print from Dover books.

Fawcett was one of the original group of illustrators, along with artists like Austin Briggs, Al Parker, Norman Rockwell and others, brought together by Albert Dorne to form the Famous Artists School.

I haven’t found a specific site dedicated to Fawcett’s work, but Leif Peng has come through again (as he so often does) with a terrific Flickr set (note that there are multiple pages of thumbnails), as well as a brief article on his blog, Today’s Inspiration.

Gallery Nucleus, in Alhambra, California is hosting a Robert Fawcett Solo Exhibition, the opening for which is tomorrow, May 22, 2010, (though they haven’t yet posted pieces from the show). The exhibition runs until June 14, 2010. 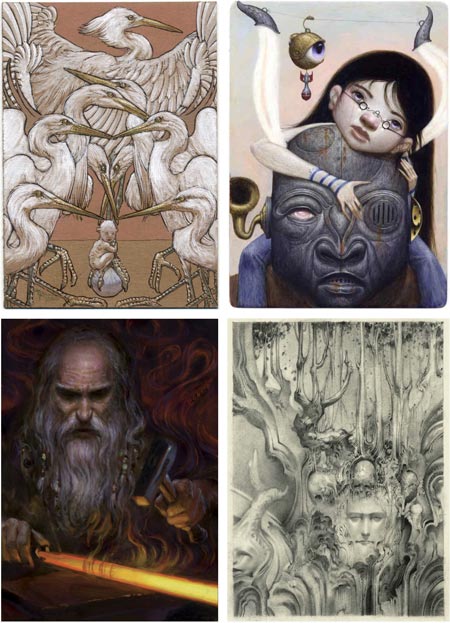 MicroVisions is a yearly auction of small (5×7″, 12x17cm) paintings by noted science fiction and fantasy artists, arranged by Irene Gallo and Dan Dos Santos, the proceeds of which go to the Society of Illustrators student scholarship fund.

[Thanks to Bill Carman for the heads-up.]

Link: MicroVisions 5 auction on eBay (to May 26, 2010
Article on The Art Department
My post on last year's MicroVisions 4, and here

James Bama is one of America’s primere “Western” artists, though less in the sense that term is usually applied to artists who depict the landscapes of the American West, and more in the tradition of artists like Frederic Remington who portray the people and character types associated with the traditions of the frontier west and their inheritors, modern cowboys, mountain men and native Americans.

After a successful career as one of America’s noted illustrators, creating memorable illustrations for magazines, advertising and book covers, most famously his striking series of covers for the Bantam Doc Savage novel series, Bama moved from New York to Wyoming began to devote himself to his personal work and gallery art.

Bama’s intensely focused realism draws its power from both his keen observation of his subjects and the graphic strength his compositions inherit from his years as an illustrator.

Underlying both phases of his career is Bama’s skill as a draftsman, and that aspect of his art is brought out beautifully in a new book from Flesk Publications: James Bama Sketchbook: A Seventy Year Journey, Traveling from the Far East to the Old West. I received a review copy from Flesk and was delighted to find it full of Bama’s wonderfully realized drawings and character studies of his Western subjects.

Most are preliminary drawings on which finished paintings were based, though many were of subjects that never became paintings. The book also includes small color studies, a very nice series of travel sketches from trips abroad, notably to China, color studies from his days in advertising, and even drawings from his time as a student at the Art Students League, where he studied with Frank Reilly, among other notable instructors.

Most of the drawings in the book are done in a style that speaks to Bama’s approach as both a draftsman and a painter, in which delicate pencil outlines contain areas of graphite tones, value studies set in strong compositions against minimal backgrounds.

The character of the faces of his subjects is Bama’s main focus, but a strong second is the character of their clothing, whether the traditional and ceremonial costume of Native American tribes, the rough denim and leather of cowboys and ranch hands, or the simple dress of Chinese farmers. Bama captures them with a sharp eye and deft hand.

The book can be ordered directly from Flesk Publications, who also published a previous book on Bama’s color work, James Bama: American Realist. The latter is still available, but in a limited quantity.

Flask has done their usual superb job with the book’s production values, right down to the color and nature of the paper on which the sketches were drawn. However, even though Flesk’s online book previews are getting better, I could still wish for more and larger sample pages from the books on the web site, particularly for those who might be coming across an artist like James Bama for the first time.

Bama does not have a dedicated site that I’m aware of. JamesBama.com is the Jerry W. Horn Gallery offering limited edition prints, and Greenwich Workship has a gallery of limited editilon prints on canvas. I’ve listed some additional resources on both the new book and on James Bama below.

A pencil test is a step in the process of creating traditional (hand-drawn) animation in which the artist draws a sequence in pencil, which is then photographed and run as an animation.

This allows animators to see, assess and, if necessary, adjust the crucial elements of motion and timing prior to creating the more elaborate inked cells that are used for the final animation.

These are never meant for the public, any more than concept art or preliminary sketches; they are just intended to be tools for the animator. The images are often rough and characterized by smudges, false starts and scribbled notes.

The process is fascinating, though, and so is seeing the characters move and act, but in a rough state that makes it more obvious that these are moving drawings.

Pencil Test Deopt is a blog maintained by animator Jamaal Bradley, in which he gathers together pencil test videos from around the web and posts them along with descriptions of the piece and the animator(s) involved.

There are some pencil tests from classic Disney animations, as well as some recent additions from great Warner Brothers animators.

This is a tremendous resource for anyone interested in animation, and the process by which drawings “come alive”.