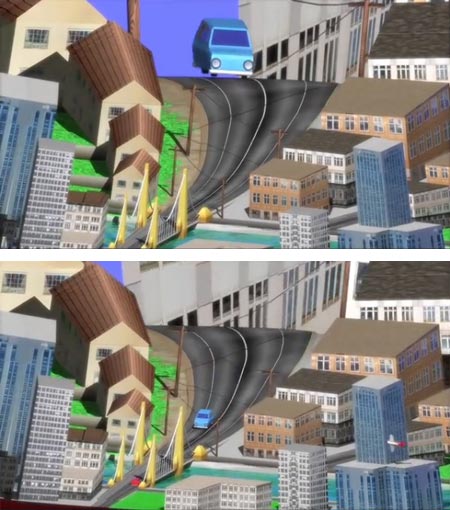 The most important rules of linear perspective are that objects appear smaller in the distance, and parallel lines converge on a hypothetical distant vanishing point.

In true reverse (or inverse) perspective, these rules are reversed, in that objects are larger in the distance and parallel lines converge in the direction of the observer’s position.

Reverse perspective is sometimes called Byzantine perspective because of its use in icon paintings, in which objects like thrones or platforms are depicted as wider on the portion farther from the observer. The notions that have been applied for explanation are that the important point of view is that of God, not of the human observer. Whether this is the actual intent is unknown, but it’s worth remembering that the invention of linear perspective postdates the Byzantine, so they could not have been using the reverse of codified rules they presumably didn’t have.

For those of us who have been exposed to linear perspective in images for all of our lives, the idea of reverse perspective is hard to visualize, but Jeremy Mooney-Somers has used 3-D graphics software (a modified version of Art of Illusion) to make an animated visualization of True Reverse Perspective.

I have to emphasize that the images above do not convey the idea. You must see the animated version to get the effect.

(It’s interesting to contrast this with with the Reverspective of Patrick Hughes; though not actually true reverse perspective, it’s an interesting variation on the way we perceive three dimensional relationships.)

One Reply to “Reverse Perspective Animation”