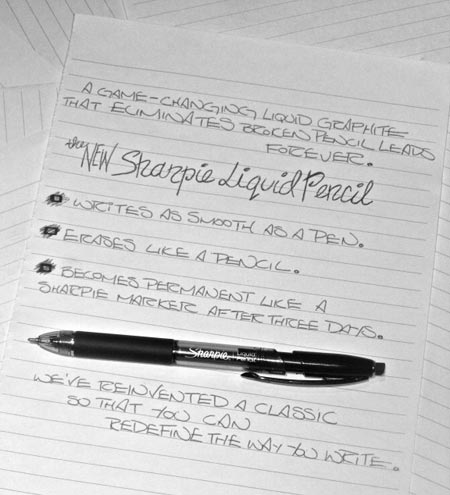 Sharpie, makers of the iconic line of markers and pens, has announced a Liquid Pencil, a pen like instrument that makes lines with “liquid graphite”.

The lines are apparently erasable like a pencil, but dry into ink like permanence in 24 to 36 hours (depending on whether you believe the packaging or the Sharpie blog).

I like to carry around small sketchboooks, but seldom sketch in pencil because the subsequent wear on a sketchboook carried in a pocket often smears pencil drawings. I love the idea of being able to sketch in graphite, erase and smudge while drawing, and then have the resulting drawing “self-fix” in a few days.

Whether it actually works as advertised I don’t know. I haven’t had a chance to try one of these yet, but the concept is appealing enough that I thought I’d mention it now. The Sharpie blog says they will be available in stores in September, though Office Depot shows them as available for order online now.

Engadget has a short video review of the Liquid Pencil in use.

Sharpie, incidentally, is looking to make their web presence a resource for doodlers, with their Sharpie Uncapped site and Showcase (more here and here).

[Via Daring Fireball and Engadget]

[Addendum 8/29/10: Alas, though I haven’t yet tried this myself, follow up posts on Engadget indicate that the dream of the Liquid Pencil is indeed just a dream, and Sharpie is getting by on their claims on a technicality. The marks remain erasable, to some degree, indefinitely. No mention was made of smear resistance, however, so I may yet try one when I get the chance, but Sharpie hasn’t done themselves any favors with this bad bit of PR.]