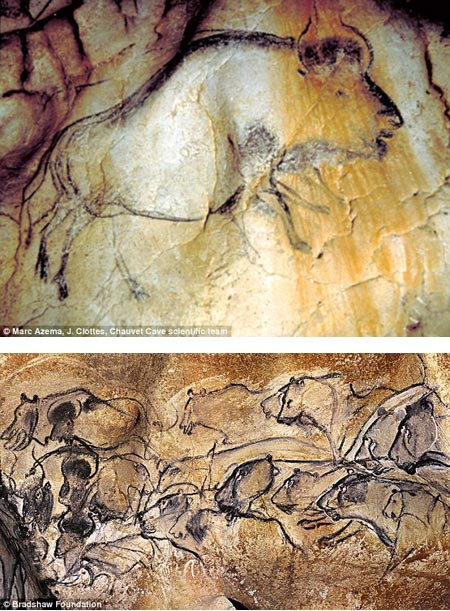 Based on current evidence, the development of writing, and with it, “recorded history” goes back at least 5,000 or 6,000 years, perhaps further.

The development of agriculture, which we use to mark the beginnings of “civilization” can be set at roughly 10,000 years. (Those who choose to believe that the earth is 4,000 to 7,000 years old can put their fingers in their ears and chant “La la la la la…” until we’re done discussing science and history.)

In contrast, radiocarbon dating has established that art, in the form of sophisticated cave paintings discovered in France and Spain, is at least 35,000 years old.

Animation, the use of multiple images to give the illusion of motion, has generally been assumed to have been an invention, in various forms, of the early 19th century. (It’s interesting to note that animation, even if you assume it to have started in the 19th century, predates and is the parent of movies, not the other way around.)

A new paper by French archaeologist Marc Azéma and his collaborator, artist Florent Rivére, suggests that animation may in fact be almost as old as our oldest sophisticated examples of art, going back some 30,000 years.

Based on 20 years of research, a recently published a paper that summarizes their findings outlines how paintings on cave walls in Chauvet and La Baume Latrone, that show animals with multiple superimposed representations of legs, tails, heads or even body positions, may have been more than suggestions of motion, and may, in fact have been designed to be animated by the action of flickering firelight.

There is a video accompanying some of the articles listed below in which simplified examples of the cave paintings have been extracted and arranged in sequence to show how that effect may have worked.

Prehistoric Europeans may also have invented the “thaumotope”, an animation toy assumed to have been invented in the 19th century — essentially a disk with images painted on both sides that, when suspended on two strings (or strands of animal tendon), could be spun to make the images appear in rapid sequence, producing the illusion of motion or superimposition.

Perhaps this helps explain why France, out of proportion to its size and population, is such a strong center for animation today — they’ve been at it for 30,000 years.

One Reply to “Is animation older than civilization?”