The Magdalen with the Smoking Flame, Georges de La Tour.

Original is in the collection of the Los Angeles County Museum of Art.

Link: The Magdalen with the Smoking Flame, Google Art Project

Hovig Alahaidoyan is a UK concept and visual development artist and designer for games and film.

Though his blog is not extensive, and his portfolio is available only as a PDF, Alahaidoyan recently participated in Under Tomorrows Sky, in which he helped bring to life the visualization of a future city as conceptualized by a think tank of scientists, technologists, futurists and other artists (images above, top three sets of images and detail crops).

The site for the project has large images of the work he contributed (and here).

The large images for that project show Alahaidoyan’s skill at simultaneously conveying scenes of huge scale and the human scale in which people exist in relation to those scenes. 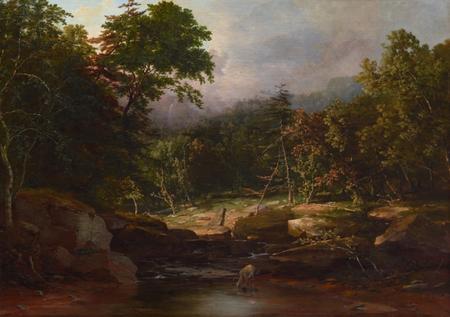 Visual effects artist Catherine Nelson, who has worked on films like Moulin Rouge and Harry Potter and the Prisoner of Azkaban, creates her personal work in the medium of digital photography, compositing hundreds of photographs into miniature floating worlds.

There are several series in the “Artwork” section of her website, as well as earlier works that include imaginary landscapes.

[Via Slate, which has a nice overview of some of her images in Christopher Johnson’s article on Nelson this morning.]

In the Metropolitan Museum of Art.

Yes, that Tiffany. Many who admire his designs and stained glass aren’t aware of his work as a painter. See my previous posts (listed below).

The Pushkin State Museum of Fine Arts in Moscow has placed online a catalog of their collection of Japanese Prints from the 18th and 19th centuries.

You can browse through sections for landscapes, beauties, actors, warriors, sumo wrestlers, flowers and birds.

You can also browse by artist or school, and there are additional reference materials.