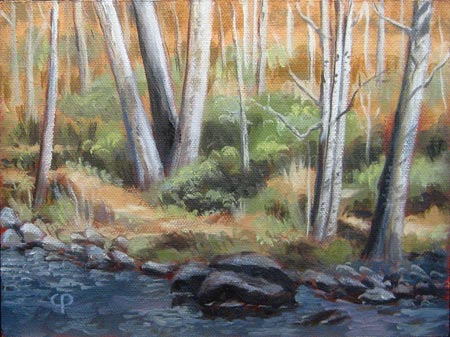 Back in 2005, the year in which I began writing Lines and Colors, I reported about an artist from Virginia named Duane Keiser, who had the year before begun a practice of painting a small painting every day, posting it to a blog titled “a painting a day” and placing it up for auction on eBay.

It seemed a unique thing at the time, and as far as I can establish, Keiser was indeed the originator of the practice.

In my article, I remarked on what a great idea this was, and how I wished I could emulate the discipline. It promised the kind of advancement as a painter that only regular painting can provide, aided by the incentive of selling the paintings as they were done.

The following year, I reported on others who had become “painting a day” participants, like Karin Jurick, David R. Darrow, Shelly Grund, Elin Pendleton and, in particular, Julian Merrow-Smith.

Over the years since then, I’ve watched and reported on the burgeoning of the “painting a day” phenomenon, although it has become so widespread and generalized that the term has lost much of its meaning, and I now tend to use the more general term “painter/bloggers”.

This is a practice in which hundreds of artists, at all levels of experience, are painting and posting their work on blogs and connecting with buyers through online auctions, PayPal payments, Etsy shops, group sites like Daily Paintworks and other means of direct sales — either bypassing or supplementing the traditional gallery system.

After following this for some time, and having gradually brought my own painting practice somewhat up to speed, I’ve decided to jump in and try it for myself.

The regimen of painting every day remains appealing, and the idea of selling the work makes it more likely I will adhere to the practice and hopefully will allow me to devote more time to painting.

What I’ve learned and decided so far.

I’ve tried to observe some of the best practices from those who have been doing this for a while; and as I begin my process, I’ll try to make occasional reports on Lines and Colors for those who might be interested in what I learn.

I’ve also tried to follow my own advice in my article on “How Not to Display Your Artwork on the Web” and the follow up series on “How to Display your Art on the Web“.

So far I’ve established a few things that seem basic and essential, and I’ve also made a few decisions to vary from the mainstream.

Though I endeavor to paint every day, my goal for posting finished paintings will not be “a painting a day” but a more modest one of two small paintings a week, which I will try to post consistently on Mondays and Wednesdays. [Addendum: I’ve changed this to Mondays and Thursdays.] 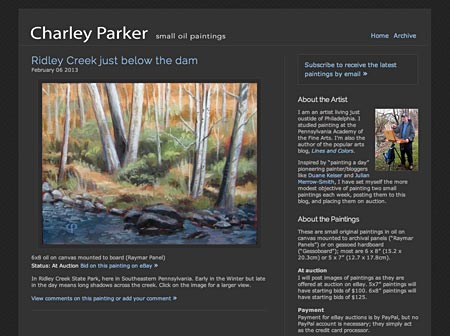 Like most painter/bloggers, I’ve created a blog, on which I will post my paintings as I put them up for auction.

Unlike many, however, I’ve decided that on that blog I will only post paintings, and not water it down with posts about works in progress, studio photos, the new brushes I just got, the weather, or any other topics not directly related to the paintings. I will continue to insist that the home page of a website, or the top of a blog’s home page, should always be aimed at the first-time visitor, not those familiar with the site who are returning.

For the design of the blog itself, I’ve deliberately chosen a dark neutral background, as I think it shows off the color of images to best advantage. Many painters without design experience don’t realize how much a colored web page background, that may seem appealing for the blog itself, can compete with and detract from the presentation of their work.

I’ve made a point of dedicating the sidebar to introducing myself, and describing the intention of the site, the size, medium and support of the paintings, the process, and my policies for selling and shipping the paintings. I’ve also made sure to provide a contact email address.

The current painting will appear at the top of the page, and visitors will have the ability to click on the image to view it large, or click on a link to view or leave comments. Comments will not only add interest for those visiting the site, but hopefully provided informative feedback on the paintings. 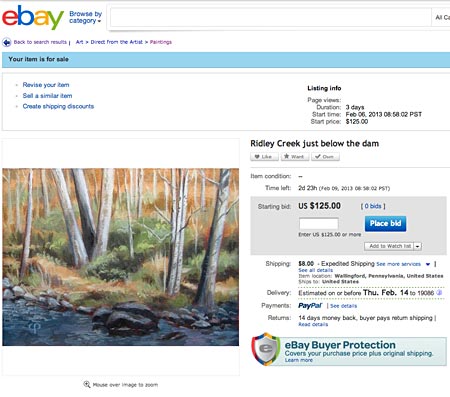 I’ve chosen to use eBay for the auctions, primarily because I already have an account and there is no upfront expense as with the Daily Paintworks auctions.

Most of my paintings are 5×7″ or 6×8″, and in keeping with the kind of size-based scale I would apply to gallery pricing, I’ve decided to set their auction minimums at $100 and $125, respectively.

I’ve also decided to limit my auction periods to 3 days, though this is one of the elements of the process of which I’m least confident, so it may change. [Addendum: Yes, changed to seven days.]

On the blog, I’ve provided a consistent line below each painting on the entry to show the painting’s status: At Auction, Available or Sold, and a clear link to the auction.

There will be an archive of past paintings, sold or otherwise, and a page for available works that are not at auction. Paintings not sold at auction will be priced at what I would consider gallery minimums at $200 for the 5×7″ and $250 for the 6×8″.

Near the top of the blog, I’ve included a sign-up for a newsletter, by which those interested can receive an email notice whenever I post a new painting.

For this, I’ve chosen to use MailChimp, which allows you to create and manage an email newsletter list for up to 2,000 subscribers and 12,000 emails per month for free.

I’ve created a new email address, specifically for contact through the painting blog.

I’ve also given the blog some basic search engine optimization (more on that later) and I will probably leverage my ability to place an ad on my own general topic blog (i.e. this one) to perhaps send some visitors, and some “Google love”, to my new painting blog.

One thing I’ve decided to do differently than most painter/bloggers is to delay posting the paintings for several weeks.

Common practice is to post a painting as soon as it’s done, hot off the easel, so to speak. This, however, means that the purchaser, whether direct or through an auction process, must usually wait several weeks for an oil painting to dry enough to be shipped.

At the risk of appearing out of sync with the seasons, particularly as they change, I’ve decided to wait three to four weeks for the paintings to dry, and then apply a light coat of retouch varnish — with another week for that to dry, before posting the paintings and putting them up for auction.

This will allow me to ship the paintings as as soon as the auction closes. I’ve tried to weigh the the plusses and minuses of both approaches, but if I buy something, I’m much happier when I receive it sooner rather than later.

My decision to varnish the paintings is as much a desire to even out the painting’s surface appearance as to provide protection. I seldom use medium when painting, so even though I’m using a very high quality paint (more on that later), passages in which I’ve used thinly applied chromatic blacks in particular (e.g. Alizarin plus Viridian or Ultramarine Blue plus Burnt Umber) can look flat or “sunken in” compared to more thickly applied areas of brighter color.

After a bit of research, I’ve decided to use Gamblin’s Gamvar synthetic resin varnish, thinned with odorless mineral spirits (OMS to varnish 5:1), to act as a retouch varnish. This can be applied much sooner than a final varnish as it allows the paint to continue to dry. A light coating of this also has much less gloss than a full coat of final varnish.

Unfortunately, I can’t say I’ve arrived at a completely satisfactory method of photographing the paintings. I’ll go into more detail on what I’m doing in that respect in a future post.

I’ve been pretty consistent in recent weeks with painting every day and finishing two small painting each week. I’ve just posted my first painting (above, top), which was painted at a nearby state park several weeks ago (with a few finishing touches in the studio).

I’ll try to occasionally report on my progress here, as I learn what works for me and what doesn’t.

Of course, I’m always open to comments or suggestions from others who have engaged in the process.

It’s all about learning.

31 Replies to “My turn as a painter/blogger”