He has a particularly deft touch with suggesting light sources within larger areas of subdued values, as in his science fiction themed cityscapes. He also uses muted value relationships in his atmospheric environments.

Roughman’s seemingly simple — but precise and deftly rendered — 17th century drawing is described on the Rijksmuseum’s site with chalk as the material and brush as the technique. I assume from the look of the toned areas that water was employed to smooth or smear the chalk into wash-like passages.

I love the way he has succinctly indicated the water with reflections; and the small touches that can almost go unnoticed — the figures on the bridge, the flock of birds in the middle distance and the ducks in the right foreground.

Roghman’s use of value contrast to set off the building to our left is particularly effective.

Jean-Baptiste Monge is an illustrator, concept artist and character designer who I have featured previously on Lines and Colors.

Monge combines superb draftsmanship, sensitive textural rendering, and a keen appreciation of color and value in his beautifully realized character creations — in particular his delightful gnomes, goblins, trolls and other “faerie folk”.

Monge has an obvious respect and affection for 19th century “Golden Age” illustration, as well as the traditions of the “Faerie Art” genre popular in France, England and other locations at the time.

In a modern genre often populated with lightweight attempts to evoke the “magic” of fantasy and fairies, Monge gives his characters a gritty solidity that makes them feel like the would smell of earth and leaves and home brewed ale.

Since I last highlighted his work in 2012, Monge has redesigned his website, on which you will find examples of his work in several galleries (don’t miss the drop-down choices under the “Illustration” navigation tab).

Monge has been hard at work on a new collection of his most admired work, Celtic Faeries, an edition that will be in English, with added features, including sketches and preparatory work. These are presented as a kind of field guide to these wild and whimsical denizens of the forest floor, with passages the delve into their history and background to accompany his beautiful illustrations.

Grigoriy Grigorievich Myasoyedov was a founding member of the group of 19th century Russian painters know as the Peredvizhniki, who rejected the formalities of the Impreial Academy of the Arts in favor of traveling exhibitions.

Unfortunately, he is not as well known outside of Russia as his more famous counterparts, and information and examples of his work are harder to find. I wish it were otherwise, as some of the examples that are available in reasonably large images are tantalizingly wonderful.

Someone who is better equipped than I to search Russian language resources might find more.

In the Orchard, Edmund Charles Tarbell

Link is to large, downloadable file on Wikipedia; original is in the collection of the Terra Foundation for American Art.

Apparently, Edmund Tarbell — one of most noted of the painters classified as “American Impressionists” — liked to say that he wasn’t particularly influenced by the French Impressionist painters he encountered in Europe.

This is where I cough into my hand, smirk and say, “Yeah, right!”, as the influence is pretty obvious. That being said, Tarbell is certainly an exemplar of what made the American Impressionists particularly different from their French counterparts, and we see it in this strikingly beautiful work.

Though rendered in the short, painterly strokes of brilliant color associated with high Impressionism, the figures who sit amid sunlight and dappled shadow in Tarbell’s idyllic scene are drawn with Academic solidity — a foundation that the French Impressionists, in their revolt against the artistic establishment, felt they had to abandon.

The models are Tarbell’s wife, her sisters, and a family friend. The painting was meant to bring the artist attention when he exhibited it at the 1893 World’s Columbian Exposition in Chicago. It succeeded in that role and Tarbell did not sell the painting, keeping it for the remainder of his career.

The painting remains stunning, as I can attest from having the pleasure of seeing it in a memorable Tarbell exhibition that visited the Delaware Art Museum in 2002. It’s large — roughly 5 x 5 ft (154 x 166 cm) — and it envelops you it its inviting remembrance of leisurely summer days. 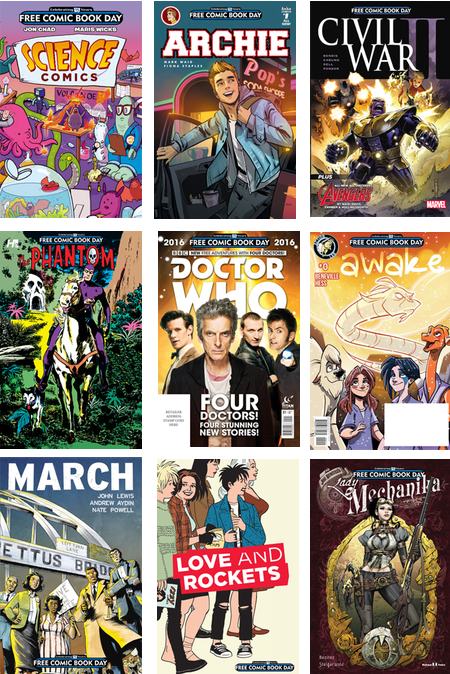 Participating comic book shops will be giving away a selection of special promotional comic books, designed to introduce new readers both to those individual titles and to the fun of reading comics in general.

Find a local participating shop by zip code on this Store Locator.

The Free Comic Book Day website has more information, including a list of the available titles. Glen Weldon has an overview of the titles on the NPR website. (Not all titles will be available at all shops.)

The comic book shops will be in a kind of “open house” mode, and glad to make recommendations and introductions to the current range of comic book titles and subjects — which you may find surprisingly diverse.

Many shops will be featuring guest artists or writers and having special sales in coordination with the event. Check the individual shops’ websites for details.

I’ll be checking out the free comics at my personal favorite comic book (and other book) shop, Between Books, in Claymont, DE.

For more of my descriptions of the event, see some of my previous years’ posts on Free Comic Book Day.