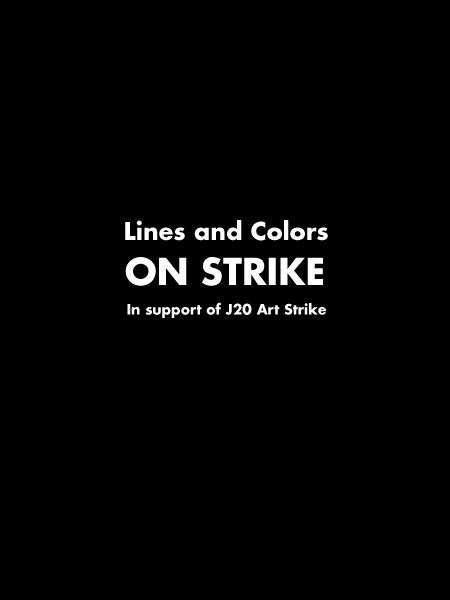 There will be no new posts today on Lines and Colors about art or artists, no lovely images of art to inspire or amuse you. This is perhaps a portent of things to come, but today it’s just a protest.

Lines and Colors is on strike today in support of the J20 Art Strike, calling for arts organizations and institutions to not do business as usual as a symbolic act of resistance to the looming shift in government power, and the potentially disastrous effect it will have on the arts, humanities and creative endeavor and discourse in general.

Even ignoring the fact that it’s been demonstrated that every Federal dollar spent on arts funding brings back nine or ten times that amount to the treasury in the form of increased economic activity and tax revenue, the amount of “savings” represents less than two tenths of one percent of the federal budget – for all practical purposes, statistically insignificant.

So this is really a gesture, a raised middle finger to the arts community to let us know how much they despise us.

Given the avowed intentions and previous actions of many of the legislators now taking control of the congress, this is likely just the first in a series of ongoing actions that will make the creation of art and the free exchange of ideas more difficult in the coming years.

In the past, I’ve tried to keep my political views in check when writing Lines and Colors, and have only expressed them in subtle ways.

These people have declared themselves the enemy of much that I care about, and are therefore my enemies.

Little acts like this, and anything I may say, are also likely statistically insignificant, but I have to make some kind of symbolic statement of resistance to avowed enemies of the arts, even if just for my own sense of self respect.

In writing for Lines and Colors, I’ll keep my expressions of concern related to the arts, but I’ll state them clearly. If you don’t like them, you’re welcome to comment, but I won’t tolerate flame wars, and I reserve the right to control what does or doesn’t appear on my own blog.

Lines and Colors is, after all, my opinions about art and artists — what I find valuable or of interest and consider worth sharing with others. If the expression of my political opinions as they relate to the health of the arts community in this country offends you, you’re welcome to seek inspiration elsewhere.

If you think I’m overreacting, you’re welcome to your opinion. Bookmark this post and put a reminder in your calendar to stop back in four years to see if I was wrong. (I desperately hope I’m wrong.)

That is, of course, if Lines and Colors is still here in four years.

One of the other announced initiatives of the incoming wave of big business uber alles is the elimination of Net Neutrality — from which control of the internet will be ceded to the telecoms and big entertainment companies.

This will happen so gradually you won’t notice at first, but it will change inexorably until the web becomes more like TV — a one-way flow of content and information from corporate producer to consumer, and a one-way flow of money in the other direction.

If you don’t know what Net Neutrality is, or why it matters, see this handy explanation in comics form from Economix.

For more on the strike, see the J20 Art Strike page.

More to the point, if you want to know why I feel this way, see my plea to Lines and Colors readers prior to the election to vote in defense of the arts: “Vote like the future of the arts in the US depends on it“, in which I go into more detail on why I think this administration and the accompanying shift in power in the congress bode ill for the arts community in this country.

They’re just this day assuming office, and — sadly — I already have to say “I told you so.”

Link: J20 Art Strike
"Vote like the future of the arts in the US depends on it"
"Net neutrality: What it is and Why You Should Care", Economix