Emily Hare is a freelance illustrator based in the UK who has a wonderful knack for creating beasties and creatures.

These have a nicely strange charm, or a charming strangeness, or, well.. you get the idea.

Though she used to work digitally, she is now working in traditional media, primarily watercolor.

Among the items in her online shop, is the option to preorder her book, Strangehollow.

Link is to the image on Wikimedia Commons. I don’t know the status of the original; it was sold at auction in 2014, so it may be in a private collection.

Turn of the century Austrian painter Olga Wisinger-Florian give us a wonderful example of how to handle a complex, colorful and highly textural scene with deft use of hue and value relationships. 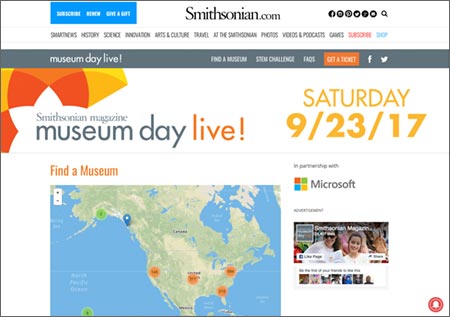 You just need to order your tickets in advance (today), print them out and take them with you. Hundreds of museums are participating, but you must choose just one, and you are limited to one pair of tickets.

Search for a museum on this page.

You can search by name or by location. I found the Zip code search less than useful, because it doesn’t search a radius. The state lookup is more helpful (though it doesn’t cross state lines). Drill down by location on the map.

Once on your chosen museum page, click “Get Tickets” and enter your name and email to receive tickets by email.

This is all kinds of museums, art and others, and the event should not be confused with “Art Museum Day”, which takes place in the spring.

Danielle Richard is an artist from Quebec, Canada who works in oil, acrylic and pastel.

Her subjects are primarily young women in pastoral scenes, along shorelines or in idyllic views of small boats or canoes on lakes.

Though there isn’t an overt similarity, her work reminds me of the sensibilities of some of the Pre-Raphaelite painters in the attention to nature, fascination with value relationships and the presentation of beauty.

Her website is available both in English and French, and her blog, though in French, is easy enough for non-French speakers to browse. There is a short interview with Richard on The Art Edge (part 2 here).

There is something gently dreamlike about Richard’s paintings, as though evoking those special little moments in time when it dawns on you — somewhat to your surprise — that everything at that moment is perfect.

Luigi Cavenago (also Gigi Cavenago or GigiCave) is an italian comics artist based in Milan.

He is best known for his work on the supernatural detective series Dylan Dog, for which he did cover illustrations as well as interior art.

Cavenago has a forceful, graphic style, contrasting blocks of color with areas of detail and texture. Often he does complex compositions with multiple figures and lots of implied movement.

The only web presence I can find for him is his deviantART gallery and a blog that hasn’t been updated since 2014.

The blog is still worth exploring, though it’s one of those annoying Blogger arrangements with no “Previous Posts” links. You have to use the dated links in the right column to access previous years.

The museum mentions that there are two versions of the image, and provides an essentially identical collection description page for each. Both are also nicely provided with a high-res version of the image.

Here is the cool version (also linked above), with a link to the high-res image for that version.

Here is the warm version, with its corresponding high-res image (actually higher in resolution than the large version of the cool image).

Neither gives an indication of which image is more true to the original painting. The museum used the cooler version in their online listing for a show from 2006 that included the painting.

Though the difference seems striking, this is an example of how easily images of an artwork — even those posted by museums of work in their own collections — can vary from the original. I was able to take each version of the image into Photoshop and quickly reproduce the appearance of the other image with some adjustments to hue and lightness.

It’s interesting to see the details brought out by the color adjustments, the oranges and reds that you see in the “warm” version are actually there in the cooler image, just not as noticeable; I suspect they are partly from an underpainting.