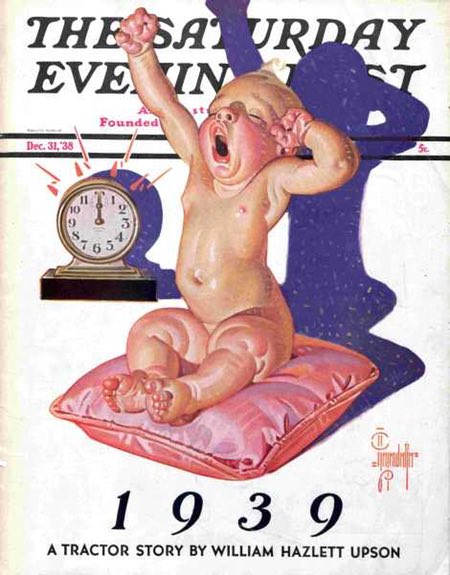 As has become my tradition every December 31st for the last 13 years, I’ll wish Lines and Colors readers a Happy New Year with some of J.C. Leyendecker’s wonderful Saturday Evening Post New Years covers.

American illustrator J.C. Leyendecker set our modern conception of representing the new year as a baby, with the use of a New Years baby to welcome in 1908. He continued the practice every year into the 1940s, usually incorporating topics of the day into his interpretation of the baby.

Here’s hoping you all have a great new year, filled with lots of great art and inspiration! 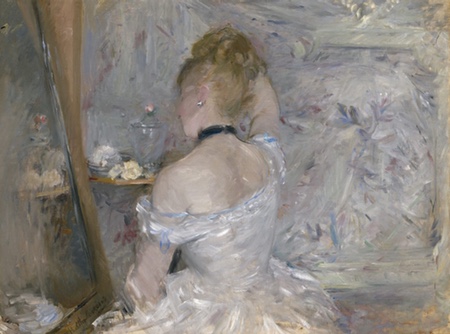 Berthe Morisot (pronunciation here) is one of the least well known of the original Impressionist painters. She is often grouped with American painter Mary Cassatt as one of the two “female Impressionists”. It is a comparison that makes sense, though, in that both painters brought intimate domestic scenes into the Impressionist canon, as well as painting still life, landscapes and scenes of public life as was more common among their colleagues.

Morisot was successfully exhibiting in the Salon — the official juried show of the French art establishment — and could have continued to do so, but joined instead with the “rejected artist” Impressionists for their independent exhibitions, from the first one onward.

Little is known of Morisot’s early style, as she was so critical of her own work that she destroyed most of what she did during her training years. She was experimental, working with pastel, watercolor and oil, and exploring variations in the Impressionist style later in her career.

She experimented with leaving parts of her canvas unfinished, giving many of her works a casual, informal appeal. Though she was influenced by her Impressionist colleagues, she was also an influence on them, and was highly regarded for her subtle color and innovative compositions.

Personally, I find her early landscapes particularly appealing, with their free brushwork over a firm foundation of drawing, an approach that shows the influence of Corot. Her figures and domestic scenes also have a combined feeling of strong composition and loose, gestural handling.

For those in the Philadelphia area, the Barnes Foundation is hosting an extensive exhibition of Morisot’s work, “Berthe Morisot: Woman Impressionist“, that continues until January 14, 2019.

The exhibition is excellent, with a broad overview of Morisot’s work and beautiful examples, well annotated. With the exception of two pieces, photography is permitted.

(A note about visiting the Barnes: The Barnes Foundation is one of the more expensive museums in the Philadelphia area, and admission prices may seem prohibitive to some, but the museum does have a monthly free access day that is not widely publicized: Free First Sunday Family Day is open to all, not just families. It starts at 10:00 am instead of the usual 11:00 opening time, and it’s best to get there early. The next one is on January 6, 2019, at which time the Morisot show will still be on display.) 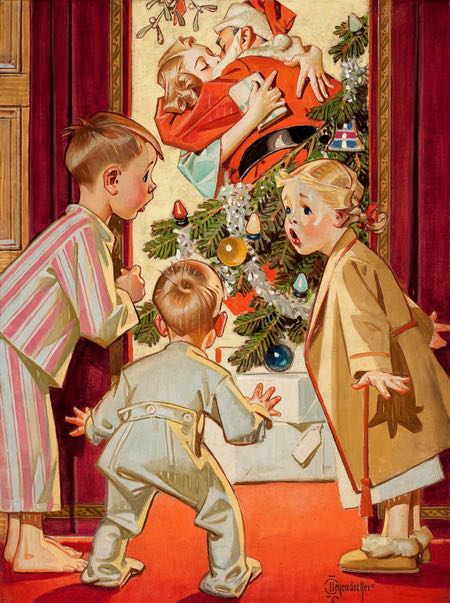 Link is to Heritage Auctions sold lots. Accessing the full high-res image requires a free account, but there is a somewhat smaller version on Tumblr here.

At first I thought that this was Leyendecker’s take on the popular song, “I Saw Mommy Kissing Santa Claus”, but the illustration was published in 1948, and the song was apparently first recorded and released in 1952.

Whether the magazine cover influenced the writing of the song is difficult to say, but it seems to me a likely scenario.

This feels like it was quickly realized by the standard of many of Leyendecker’s other illustrations, but is still shows his superb draftsmanship, and characteristic stylized fabric folds and rendering of hair. 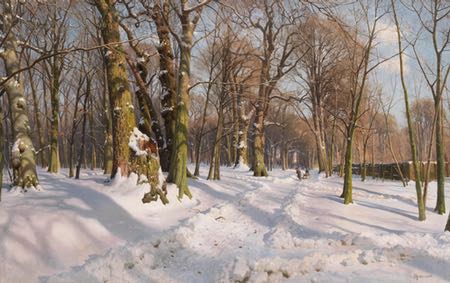 The link is to a page on Wikimedia Commons from which you can download a high-resolution image. The original is in a private collection.

A beautiful evocation of winter to mark the Winter Solstice. I love how much green and red Monsted has worked into the painting. He has kept the chroma muted and relied on the effects of simultaneous contrast of the complementary colors to make them feel vibrant.

For more, see my previous posts on Peder Mønsted. 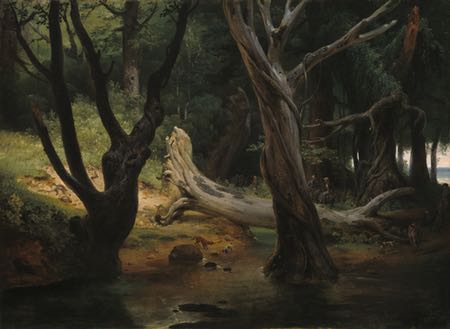 Departure for the Hunt in the Pontine Marshes, Horace Vernet

Vernet was a French painter active in the early 19th century, and his subjects included battles and historic events, portraits and Orientalist themes.

Here, he is fascinated with the landscape, even if the subject is ostensibly the hunters depicted as small figures in the shadows at middle right, behind the second foreground tree.

When I first visited the National Gallery, years ago — even among the stunning masterpieces in the collection — this and another Vernet painting of a similar subject caught my attention.

In this painting, it’s his use of value relationships that make the painting so striking for me — the contrast of the layers of dark and light, foreground to middle ground to background.

Another element of contrast is the wonderful difference in the texture of the three primary trees, two standing and one fallern.

I also love the dark mass of trees, punctuated with light, to the right of the composition, that lead our eye back into the painting.

Link: Departure for the Hunt in the Pontine Marshes, NGA 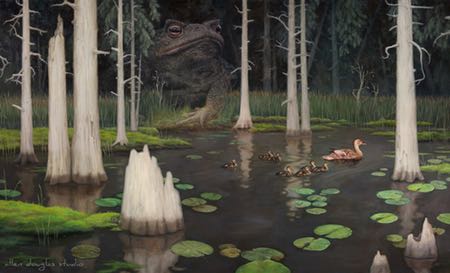