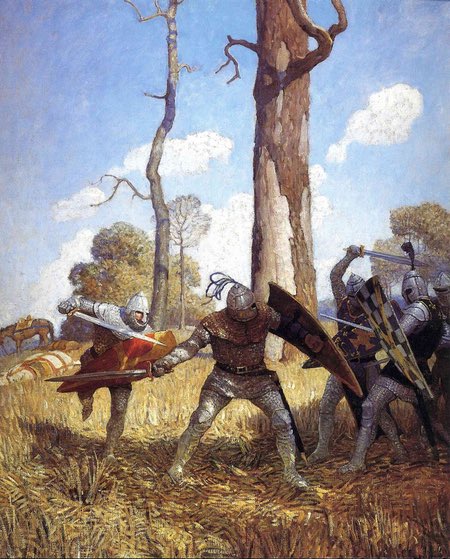 When I first started Lines and Colors back in 2005, I actually wondered if I might run out of artists I admire to write about. Some fourteen years and several thousand posts later, my list of potential subjects is longer than the list of those I’ve covered.

There are some artists, however, who are among my very favorites, that I have not yet covered. In the case of N. C. Wyeth, I’ve allowed myself to be intimidated by the task of conveying my respect and and enthusiasm for his work, and I’m remiss in not getting to this post sooner.

Given Pyle’s stature, influence and level of accomplishment, it’s no mean feat that — in my opinion, at least — the student surpassed the master in many respects.

While Pyle brought a new level of dynamics and drama to previously staid and theatrical approaches to illustration, Wyeth took his teacher’s mastery of drama and cranked it up to 11, placing the viewer on the edge of impending action or danger.

In the process, Wyeth developed a dramatic and remarkable use of light and strong value contrasts, often setting a foreground character in deep shadow against a brightly lit background.

Wyeth was also a master of texture, and many of his settings and backgrounds resound with a beautiful naturalism that owes much to his secondary practice of landscape painting.

If you search, you will find many references to N. C. Wyeth’s career as an illustrator, both in collections and reproductions of the classic books he illustrated, titles like The Black Arrow, Robin Hood, Treasure Island, Kidnapped, The Mysterious Island, The Boy’s King Arthur, The White Company, The Last of the Mohicans and many others.

What you will see less often, but can find with some digging, are examples of Wyeth’s landscapes, both of the area around Chadds Ford, Pennsylvania — where he settled after moving to the area from his home in Massachusets in order to study with Pyle — and of the area around his eventual summer home in Maine.

In his landscapes in particular, but also in his illustrations, Wyeth was a restless experimenter. He was familiar with Daniel Garber and other artists of the nearby New hope school of Pennsylvania Impressionists, and many of his paintings draw on Impressionist technique. You can also see the influence of regionalist painters like Thomas Hart Benton and Grant Wood.

Wyeth taught all of his children art, most notably, his son, Andrew Wyeth. N. C. was an imposing figure, both in personality and in his ability, and I have to wonder if his overwhelming command of drama and bold color led Andrew to choose his path of muted colors, textural paint application and contemplative subject matter.

N. C. Wyeth also did commercial illustration, murals, still life and other subjects. There are significant collections of his work in the Farnsworth Art Museum and the Portland Museum of art in Maine, and in particular, in the Brandywine River Museum in Chadds Ford, PA.

I grew up in the area around Wilmington, Delaware and the Brandywine Valley, and I’ve been going to the Brandywine River Museum since it opened while I was in my early 20s. N. C. Wyeth has been a big influence on my appreciation of art in general and illustration in particular.

The museum ordinarily has an extensive exhibit of N. C. Wyeth’s work — as well at the work of his son, Andrew Wyeth, and his grandson Jamie Wyeth — but at the moment there is a special exhibition, N. C. Wyeth: New Perspectives, that features work drawn from the permanent collection, as well as many pieces borrowed from other museums and private collections, and includes a number of his rarely seen landscape paintings.

There is a catalog accompanying the exhibit, and there are a number of other books with Wyeth’s work, including beautiful hardbound reproduction editions of many of the classics he illustrated as well as collections, like Visions of Adventure: N. C. Wyeth and the Brandywine Artists, that offers and introduction to some of his contemporaries and other students of Howard Pyle.

There is also a Catalogue Raisonné of his work, expensive as a two volume boxed set, but accessible in an online version courtesy of the Brandywine River Museum that is one of the best places to see some of N. C. Wyeth’s landscapes, even if reproduced smaller than we might like.