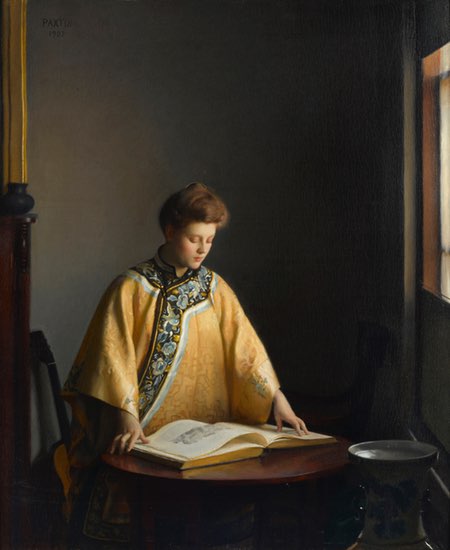 Link is to Bonham’s, which auctioned the painting in 2016 and has a zoomable version on the auction detail page. I don’t know the current location; I would assume it’s in a private collection. There is a smaller but reasonably large image online as part of an article about the sale on Antiques and the Arts (click on small image for larger version).

William McGregor Paxton was noted for his serene, contemplative paintings of elegantly dressed women in room interiors. In this beautifully realized example, you can see his fascination with the compositions of Vermeer, an interest he shared with fellow member of the Guild of Boston Painters, Edmund Charles Tarbell.

The rendering of the woman’s face and hair is a wonderful example of Paxton’s command of soft edges, the robe a study in subtle values, and the open book a tribute to the power of suggested detail.

10 Replies to “Eye Candy for Today: Paxton’s The Yellow Jacket”