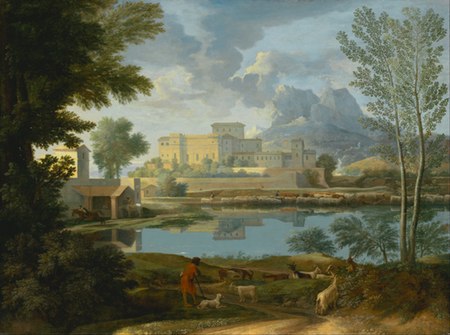 Landscape with a Calm, Nicolas Poussin, oil on canvas, roughly 38 x 51 inches (97 x 131 cm). Original is in the Getty Museum, which has both zoomable and downloadable versions of the image. There is also a zoomable version on Google Art Project and a downloadable file on Wikimedia Commons.

Among other subjects, French Baroque painter Nicolas Poussin — who spent most of his career in Rome and resisted the excesses of the Baroque style — painted landscapes in a dynamic but classically influenced style.

The title makes more sense when the painting is compared to its pendant counterpart, Landscape with a Storm, in the collection of the Musée des Beaux-Arts, Rouen.

Both deal with atmosphere, but in this case, the peaceful scene is more dramatic and engaging than that of the tempest.