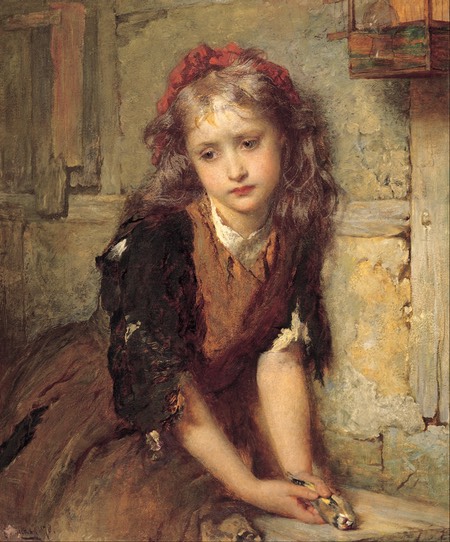 The Dead Goldfinch (“All that was left to love”), George Elgar Hicks; oil on canvas; roughly 24 x 30 inches (62 x 75 cm). Link is to zoomable image on Google Art Project; downloadable file on Wikimedia Commons, original is in the Art Gallery of South Australia.

Genre painting, which became popular in the 18th and 19th centuries, focused on scenes of everyday life and of people who were not particular known individuals, as opposed to portrait or history painting.

It was not uncommon for genre paintings to feature scenes meant to elicit emotions that might appeal to potential patrons, sadness or grief among them.

What strikes me about the painting — as in much of Hicks’ work — is his painterly, textural brush work and his use of soft edges. Look in particular at the edges that define the girl’s arms, and how they turn softly into the dark areas of the cloth and wall behind them.

I like the textural application of paint throughout — even in the softest areas of the girl’s face — and the chunky splashes of paint in the highlights of the hair.