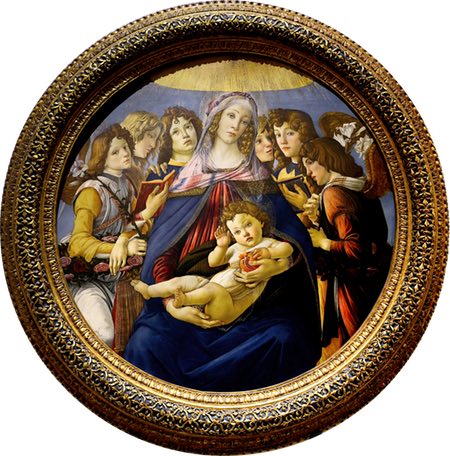 Madonna of the Pomegranate, Sandro Botticelli; egg tempera on wood panel, roughly 56 inches (144 cm) in diameter; link is to the file on Wikimedia Commons; original is in the Uffizi Gallery in Florence, which does not appear to have a reproduction of the painting on its website.

15th century Florentine master Alessandro di Mariano di Vanni Filipepi, known as Sandro Botticelli, is most famous for his large, stunningly beautiful paintings of mythological scenes, particularly The Birth of Venus and La Primavera, but the majority of his oeuvre was of Christian religious subjects.

While his mythological and religious subjects were composed quite differently, one thing I find consistent, and consistently engaging, are Botticelli’s faces.

Stylized, often idealized and at times bearing the hallmarks of actual portraiture, Botticelli’s faces are always entrancing; handled with a grace and subtlety that draws you in for repeated gazing.

In his edges that resolve into darks that are effectively outlines, Botticelli captures the combined visual appeal of rendered form and linear drawing.

In Madonna of the Pomegranate we find the mother and child surrounded by wonderful Botticelli faces, rendered in the painstaking medium of egg tempera.

It was not an unusual subject in Renaissance painting to show the Madonna with the Christ child holding a pomegranate, a precursory symbol of the future Passion and Resurrection.