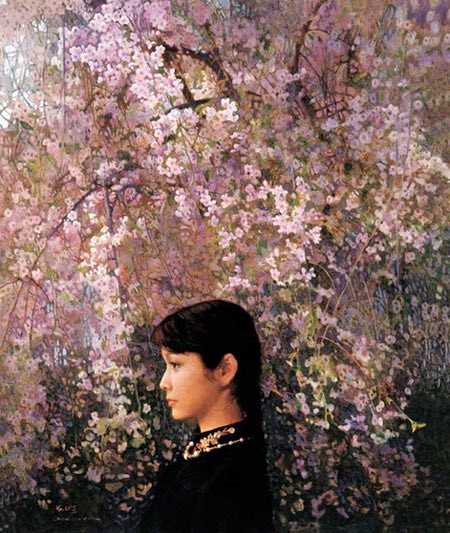 Originally from Guangzhou in China, Chen Yanning studied at the Guangdong Academy of Fine Art. He became a U.S. citizen and now lives and works in New Jersey.

Yanning takes as his primary subject portraits of young women, some formally posed and surrounded by still life objects, other more casually depicted in various activities.

Though the faces in his painting have the look of distinct individuals, I don’t know if they are portraits in the sense of being commissioned, or models posed to create interesting genre subjects. I suspect it’s mostly the latter, although he does take on formal portrait commissions, including members of the English royal family.

His draftsmanship is precise, and at first glance, one might be tempted to think of his rendering style as photorealism; but in those few images of his work online that are relatively large, I see indications that his work is more painterly than first impressions would suggest.

I find his compositions bold, many of them utilizing chiarlscuro, others with softer value contrasts.

As far as I can determine, Chen Yanning does not have a dedicated website, nor can I find a gallery that claims to be his primary representative. The best single selection of images of his work I can find is this Russian art blog. I’ve listed a few other sources below.