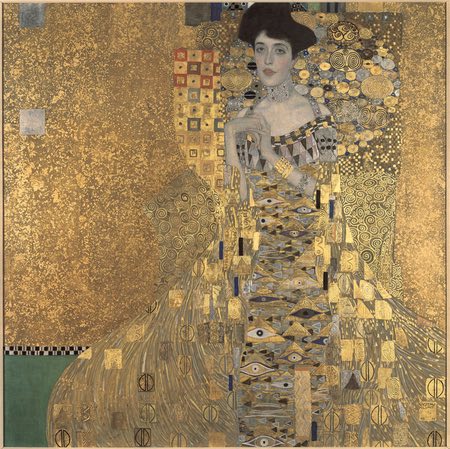 Link is to the file page for the Neue Galerie version of the image on Wikimedia Commons.

This and The Kiss are the most widely recognized works by 19th century Austrian symbolist painter Gustav Klimt.

Both paintings are from Klimt’s “Golden Phase”, in which — inspired by the use of gold leaf in Byzantine mosaics in Venice and Ravenna — he began to incorporate gold leaf into his paintings. This is the most elaborate of his works from the period, incorporating not only the metal leaf, but bas-relief created with dimensional applications of gesso.

It is titled “Portrait of Adele Bloch-Bauer I” because Klimt painted a second, much less complex and dramatic portrait of her.

There is a Wikipedia page devoted to the painting that goes into more detail, including the sexual subtext of its imagery and the story of its disposition and seizure by the Nazi regime.

You will find many images of this work that are much brighter, more saturated and shifted in hue — even on the Wikipedia article about the painting.

The bright version looks to me like it suffers — as do so many online art images — from someone throwing the image into Photoshop and cranking up the brightness and saturation because the more faithful image isn’t “pretty” enough.

However, at the risk of being hoist on my own petard, I have slightly increased the exposure on the version of the Neue Galerie’s image that I’m showing here.

it has been my experience in regard to images with which I’m personally familiar, that many museums and galleries post images of works in their collections that are darker than the real object. (Why this is so still eludes me.)

I have not had the pleasure of seeing this painting in person, but my guess is that the appearance of the real work is somewhere between the two versions, and closer to the Neue Galerie version. If someone who has seen the work in person can correct me, please do. I’ve based my adjustment on images of other works by Klimt from the same time period.