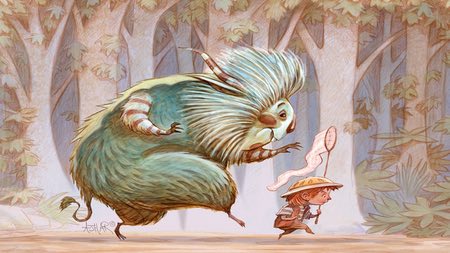 Brian Ajhar is a well known illustrator and character designer whose wonderfully loopy people and animals, both real and imagined, have enlivened the pages of countless periodicals, children books and animations over the past forty years.

His style can look so loose and gestural as to appear casually done, but if you stop an look, it’s clear that it is his training and skill and his foundation of solid draftsmanship that allow it to appear that way.

In a similar way, his colors can appear bright, but on inspection are actually often muted, made to appear brighter by careful juxtaposition.

Ajhar works in digital as well as traditional media, the latter including watercolor, acrylic, pencils and inks.

There is a gallery of his work on his website, and another on the cite of his artist’s representatives, RappArt.