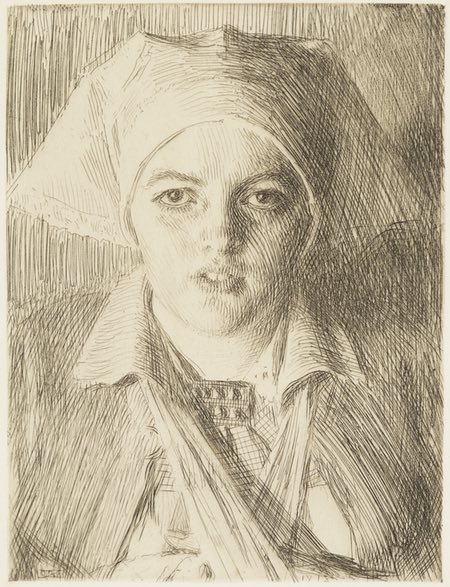 Guli II, Anders Zorn, etching, roughly 8 x 5 1/2 inches (20 x 15 cm). Link is to Bukowski’s auctions, which has a large image available from their page. I assume that the original of this particular impression is now in a private collection.

The etching is called Gulli II because the artist did a previous portrait etching of the same young woman, titled Gulli I. (Here is a print of that one in the Metropolitan Museum of Art.)

Anders Zorn, a remarkable Swedish painter who was active in the late 19th and early 20the centuries, is known for his beautiful portraits and genre scenes, as well as for his eponymous limited palette. He is less well known as a printmaker, but unjustly so.

In my opinion, he was among the best etchers in history, wielding his etching and drypoint needles with a simultaneous freedom and accuracy matched by few.

Look at the flurry of lines that make up the shading on the face — seemingly applied with casual abandon, some of their ends hooked with the sweep of the needle — then scroll back to the normal view and see how smoothly they blend into the delicate values of this sensitive portrait.

Even on the cheek on the shadowed side, where it appears that strokes have landed close to others, emphasizing some lines perhaps more definitively than he might have wanted were he trying to smooth out the tone more evenly, he still pulls off a rendering of the form that is believable.

I have to think that his hatching was done with quick strokes, aiming to capture the feeling rather than allowing caution to weigh down the effect of spontaneity.

Notice also, how few lines he has used to create the planes of the lit side of the face, and yet how definite the form is.

Despite the number of etched lines that make up this image, there are few, if any, that can be called outlines — even in the edges of the light and dark sides of the scarf where it meet’s the woman’s forehead.

Look at how the lips are formed. He’s etching like a painter.

For more, see my previous post on Anders Zorn’s etchings, as well as my other posts about Anders Zorn.