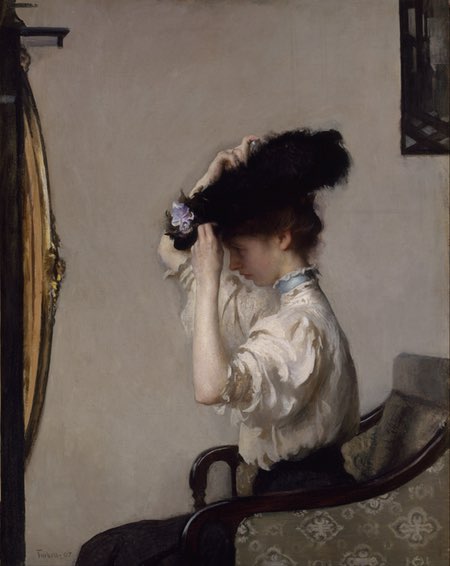 Preparing for the Matinee, Edmund Charles Tarbell; oil on canvas, roughly 45 x 35″ (114 x 89 cm); link is to zoomable version on Google Art Project; downloadable (very) high resolution file on Wikimedia Commons; original is in the Indianapolis Museum of Art, which also has zoomable and downloadable versions.

Like other members of the early 20th century group of painters known as the Boston School, Edmund Charles Tarbell frequently took as his subjects well-to-do young women quietly engaged in everyday activities. Here, a young woman tends to her appearance in a gilt-edged mirror, barely seen to the left of the composition.

Like most of his fellow Boston School painters, Tarbell combined academic refinement with the loose painterly brush work and clear observation of a scene as light and color championed by Monet and the French Impressionists.

A major influence on the Boston School painters, and Tarbell in particular, was 17th century Dutch master Johannes Vermeer, a corner of whose painting Lady at the Virginal with a Gentleman (“The Music Lesson”) is suggested at the upper right, in much the same way Vermeer himself would reference parts of other paintings at the edges of his composition. (See images above, bottom, in which I’ve inset Vermeer’s painting next to Tarbell’s shadowed homage.)

2 Replies to “Eye Candy for Today: Tarbell’s Preparing for the Matinee”