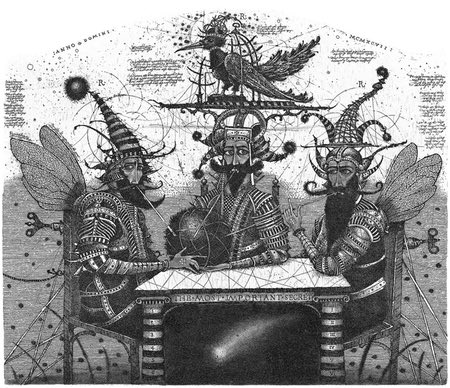 Oleg Denisenko is a Ukrainian printmaker, painter, calligrapher and sculptor who I first featured in 2007, and again in 2012.

His wonderfully eccentric subjects center on figures with elaborate costumes, intricately detailed an accompanied by a range of curious objects. He plays with proportion and scale and varying degrees of exaggeration.

Denisenko appears to vary the color of his printing inks an papers and also works in full color at times.

He shares a website called Antiqvitas Nova with his father, filmmaker Alexander Denisenko (in which they spell their name Denysenko with a “y”, though it’s listed in multiple other sources with the spelling I’m using here).

For more, see my previous two posts on Oleg Denisenko (linked below). 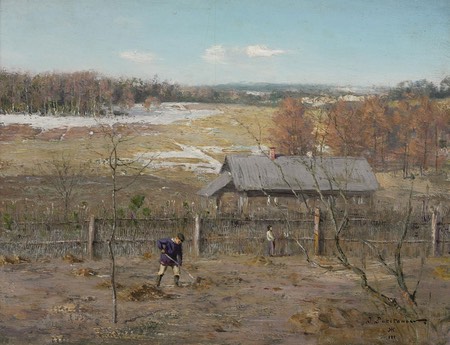 Ivan Pokhitonov is a Ukrainian painter I featured on Lines and Colors in 2019.

Many of his strikingly beautiful landscapes and occasional portraits are quite a bit smaller than you might assume from the images.

For more information, images and links to sources of images, see my previous post on Ivan Pokhitonov. 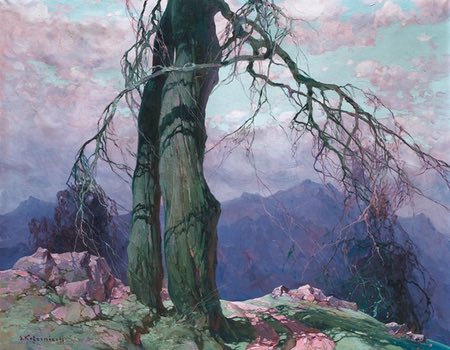 I’ve been writing Lines and Colors for more then 15 years. I found with a recent search of my own posts that in that time, I’ve featured a number of wonderful Ukrainian artists.

I’ve sometimes described these artists as “Russian/Ukrainian” artists. Ukrainian artists are often described this way, partly because Ukraine was for a long time subjugated by the Russian Empire and the Soviet Union, and partly because, within that sphere, there was much interaction between the art communities in these regions and the Russian art schools and art establishment. Many painters from Ukraine were trained in Russia and spent time living and working there.

I’ve learned in the last two weeks that previous Soviet and Russian despots, notably Lenin and Stalin, have tried to basically eradicate the identity of Ukrainians as a separate people, along with their cultural identity. Most experts agree that Putin’s intentions would be no different.

You can find some of my posts about Ukrainian artists in the links below. I’ll follow up with some “revisit” posts to focus on individual artists.

These are just some Ukrainian artists I happen to have featured previously. You can find a couple of more comprehensive lists of Ukrainian art and artists on Wikiart and Wikimedia Commons.