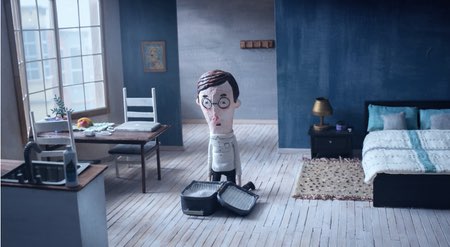 Negative Space is a touching and beautifully realized stop-motion animated short by Ru Kuwahata and Max Porter. It focuses on a father and son who bond over the way to properly pack a suitcase.

My link is to the short hosted on Cartoon Brew, which is where I encountered the film. There is also a page and short film devoted to the making of the animation.

Every year since 2006, I’ve been highlighting the brief (one minute or so) animations made by small teams of graduating students from Gobelins, l’école de l’image (Gobelins School of Communications) in Paris to be used as introductions to each of the day’s events at the Annecy International Festival of Animation.

Like last year’s group, at least one of this year’s shorts uses GCI (and suffers rom the hyperkinetic restlessness seemingly inherent in that genre). But the rest are hand drawn and as is often the case with the Gobelins’ projects, continue to bolster my faith that new generations will carry on the traditions of hand drawn animation.

This year’s theme is Brazil, which some have interpreted in reference to the rain forest, others to carnival and others to life in Brazilian cities.

Unlike previous years, there are six shorts rather than five (I don’t know if Annecy added a day of events), and there are commercial credits at the end of the videos; presumably the school has gotten sponsors to help with the effort.

You can see the shorts on YouTube. (Note: images above are just screen caps from each of the five films, not clickable embeds. Please follow the provided link to view the films.)

Short Trip is a hand-drawn interactive animation by Alexander Perrin.

The author calls it an “interactive illustration”, and the drawings are done in pencil.

If you would like to be simply and delightfully amused for 5 or 10 minutes, turn your sound on, open your browser to full screen and play with it using the left and right arrow keys.

There is information about Perrin and the project here.

As I’ve been noting every year since 2006, each year at this time, small teams of graduating students from Gobelins, l’école de l’image (Gobelins School of Communications) in Paris create short animations (usually about 1 minute) to be used as introductions to each of the five day’s events at the Annecy International Festival of Animation.

The emphasis is on 2D hand drawn animation though at least one of this year’s shorts uses CGI. This year’s theme is “La Chine a l’honneur” which I think loosely translates as “Honoring China”.

You can see all five shorts on YouTube. Uncharacteristically this year, there are short ads in front of some of the YouTube videos, but they’re of the kind that can be skipped after a few seconds. (I couldn’t find the shorts on the on the Gobelins website.)

(Note: images above are just screen caps from each of the five films, not clickable embeds. Please follow the provided link to view the films.)

X-Story is an animated short (roughly 12 minutes) by Vitaliy Shushko.

At first, I thought this was a promo or incorporated animation for a game from a major company. Given the production values, length and level of accomplishment, I was surprised to find that this was an independent animation project.

I checked Shushko’s blog and found this described as his first animated short, and that it was two years in the making.

For an indy project like this, even though he had assistance (please see the Vimeo link for credits), I’m not surprised it took that long.

The story (which can be slightly gruesome in places) is not the point of this for me; it’s the level of storytelling, production, design and realization.

I’ve seen indy animation projects at a high level before, but they’re usually much shorter.

This is done in an anime-influenced style (particularly with reference to Otomo’s classic Akira), but it doesn’t succumb to the stylistic excesses that sometimes plague that genre. The design feels fresh and direct.

I hope somebody throws lots of money at Shushko, so he can keep producing animations like this.

View the video at full screen; my small screen captures don’t do the visuals justice.

“Bury It” is a very nicely realized animated music video for a song by Chvrches and Haley Williams — animated by Mighty Nice with a design direction established by comics artist and illustrator Jamie Mckelvie, who has worked with the band previously on poster designs.

The video has something of a super-hero/sci-fi theme about powers of telekinesis, but any story is really secondary to the look and feel.