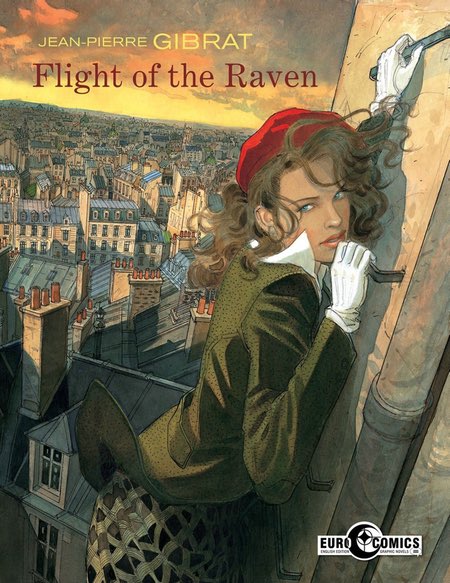 Jean-Pierre Gibrat is a French comics artist and writer noted for his graphic historical novels set during wartimes in France.

He gained the attention of American readers of European comics with the translated version of his 2002-2005 graphic novel, Flight of the Raven, set in Paris during the WWII occupation.

The book is beautiful, filled with lush evocations of Paris. Gibrat studied various locations in pen and watercolor before translating them into story backgrounds in his comics drawing style, which is also done in pen and watercolor. Gibrat is also noted for his appealing depictions of female characters, and his attention to the visual details of everyday life.

Flight of the Raven was preceded by a related story (but not a direct prequel) set in the same time period, The Reprieve, and was followed with a three volume story, Mattéo. — also set against the backdrop of war, but further back in time, in this case WWI.

You can find a number of his books on Amazon, some translated into English, some in French and other language editions.

The Reprive and Flight of the Raven were published in multiple volumes in France (three and two volumes, respectively) but were combined into single titles in the English language versions. The three French volumes for Mattéo are apparently being translated individually; only one has been released so far, the second English language volume is due in November of 2019.

Though he is both the artist and writer for his current work, Gibrat’s history of comics art goes back further, through collaborations with Jackie Berroyer and other writers, and work in the French comics magazine Pilote.

As far as I can determine, Gibrat does not have an official website, so I’ll point you to what resources I can find. You can also just try a Google images search for “Jean-Pierre Gibrat“. 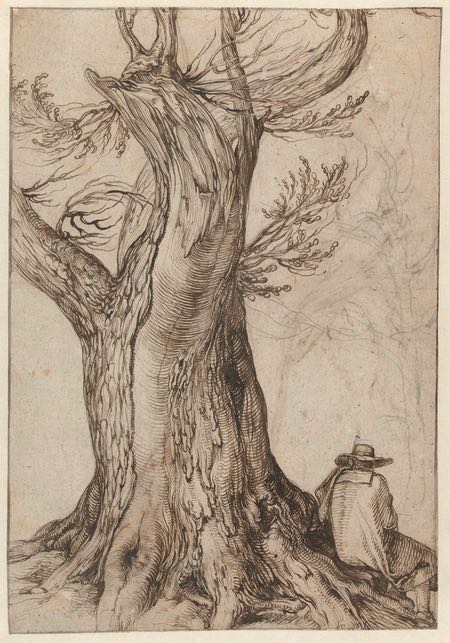 Chestnut Tree with some trees around it, Jacob de Gheyn (II)

Ink and chalk drawing, roughly 15 x 10 inches (36 x 25 cm), in the collection of the Rijksmuseum, which has a zoomable version on the website. You can download high-res images if you get a free Rijksstudio account.

Dutch painter and printmaker jacob de Gheyn II, who was active in the late 16th and early 17th centuries, had a wonderful drawing style, both bold and subtle at the same time.

I had the pleasure of seeing this drawing in person some years ago (at the Morgan Library, I think) and I was really taken with the way De Gheyn used his pen lines both to create texture and to define the volume of the tree. I love the contrast between the areas of trough bark and the smooth section on the trunk and under the branch that faces us.

The figure (presumably that of another artist sketching) is almost incidental, but still holds visual interest, particularly in the folds of the coat.

Link: Chestnut Tree with some trees around it, Jacob de Gheyn, Rijksmuseum 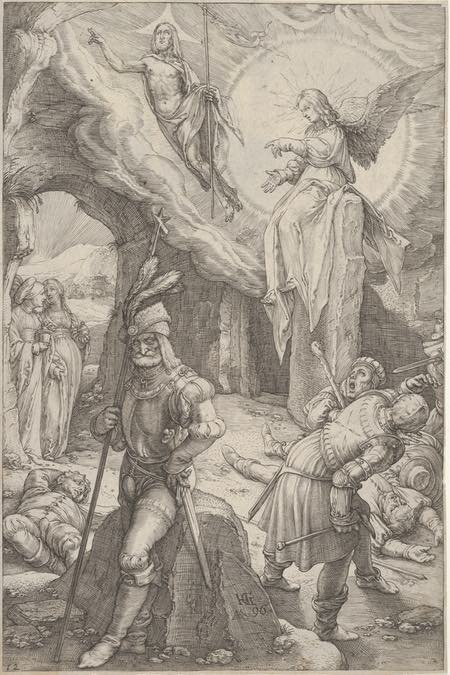 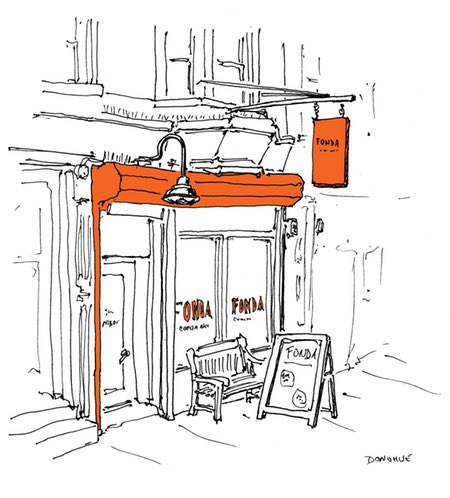 Since 2017, New York based artist and writer John Donohue has been pursuing his — admittedly unlikely — quest to draw all of the restaurants in New York City (estimated to number around 24,000, not counting ongoing closings and openings).

He takes this on by sketching on location in pen and ink, without preliminary pencil drawings. He then adds touches of a single color to the drawings. His drawing style is casual and sketch-like, with an almost cartoony feeling at times — unsurprising as Donohue has contributed cartoons to The New Yorker.

There are plans in the works for three books of drawings of restaurants in New York, London and Paris. In the meanwhile, Donohue has prints available. 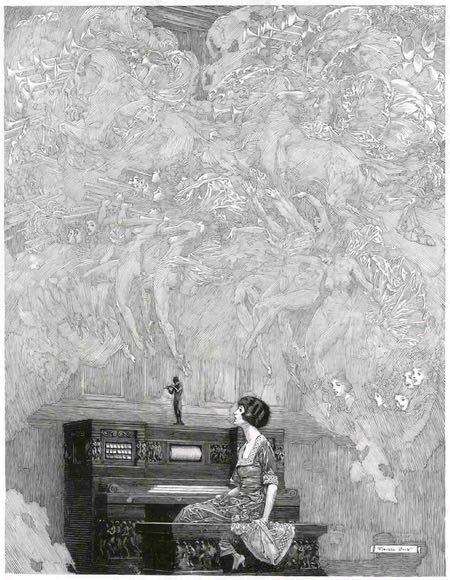 Ad for Etsy Organ in House and Garden, Franklin Booth

American artist Franklin Booth, who was active in the late 19th and early 20th centuries, was known for his marvelously intricate pen and ink illustrations, a style that came largely from the young artist confusing images in magazines that were done in wood engraving with pen and ink drawings.

Here, he pulls out the stops (oh, how I delight in that pun) in his illustration for organ manufacturer Estey Organ, printed in House and Garden magazine in 1922.

Booth has created a stunningly beautiful fantasy of the music that will come from the organ — with lines that follow both the volume of the forms and the direction of movement and action. I love the swirls in the hair and the sheen of the draperies.

In addition, all of this modeling and rendering is done at an entire level of values that separates the cloud of imaginings from the darker rendering of the “reality” of the woman and the organ! 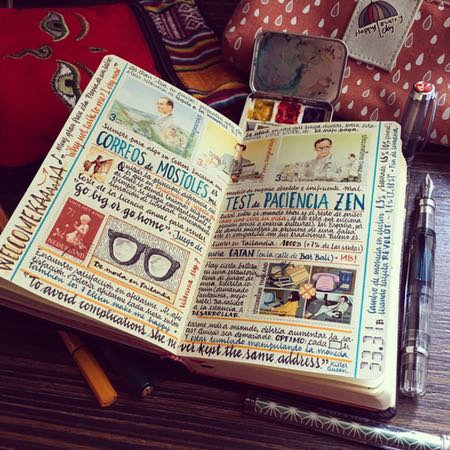 Among followers of “urban sketching”, there is an often associated practice known as “journaling”, or the keeping of a visual diary of one’s travels, day to day activities or random thoughts and ideas.

The idea of visual journals or diaries is nothing new, of course, but the current popularity of the practice, and the ability to place one’s journals online and compare notes with others, makes it an interesting contemporary phenomenon.

José Naranja is a Spanish artist, writer, traveller and observer who takes this activity to greater lengths than most. Naranja refers to himself as a “notebook maker and more”.

After years of making journals in commercial sketchbooks and notebooks, he has taken to crafting his own, using high quality paper and binding the in leather in much thicker dimensions than those commercially available.

You can find examples of his notebook pages and materials on his blog and Instagram page. He offers a facsimile edition of some of his selected pages as The Orange Manuscript, as well as prints.

You can also find quick overviews of some of his pages in articles on My Modern Met and Colossal. There is an interview with Naranja on Notebook Stories.