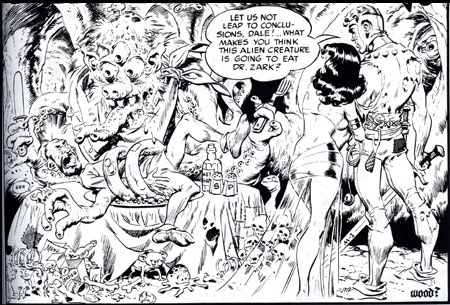 This is kind of a special post for me so I may ramble on a bit. Wally Wood’s dazzling, lurid, bizarre, and wonderful comic art is what made me want to draw comics.

When I was 10 or so, I came across some paperback reprints of the E.C. Mad comics from the 1950’s. These irreverent, hilarious comics, written by comic genius Harvey Kurtzman and maniacally drawn by Wood, Will Elder and Jack Davis, popped the top off my impressionable little brain.

The early Mad comics were outrageous, subversive and outside the mainstream in a way that’s hard to describe now. (The current Mad magazine is a pale, sad shadow of the original.) 1950’s E.C. Comics were the visual equivalent to early Rock n’ Roll. (Parents were alarmed, congress got in on the act.)

As much as I loved the Mad work by Elder and Davis, both brilliant comics artists, it was Wood who captured my attention. When I later learned that he had also done straightforward (non-humorous) science fiction comics (also published by EC in the ’50s but harder to come by as reprints) I was hooked. In the following years, I spent countless hours drawing from Wally Wood pages, trying to duplicate his trademark lighting effects and render his super-intricate sci-fi spaceships and futuristic machinery, not to mention the coolest monsters ever to slither off a comic page. I later discovered the beautiful tone-board work he did for Mad after it changed from a color comic to a black and white magazine in 1955, which just added another level to my wide-eyed fascination with his work.

Wood has had a similar impact on generations of comics artists, both directly and indirectly. He, in turn, was influenced by comic greats like Hal Foster and Alex Raymond, illustrators like Howard Pyle, Roy Krenkel and others as well as brilliant contemporaries like Al Williamson, Reed Crandall and the rest of the EC crew.

Woody, as he was known, became something of a comics legend, both supremely gifted and tragic. Driven and obsessive about the quality of his work, he was also hard-bitten and cynical about the treatment he and other hard-working artists received at the hands of a money-to-the-top publishing industry that forced the artists to do “work for hire”, signing all of their copyrights to the publishers. Although it was never an overtly successful venture, Wood was one of the first comics artists to try an end-run around the publishers by self-publishing with a magazine format anything-goes anthology comic called witzend.

His cynicism sometimes manifested itself in hilarious ways, such as his famous “22 Panels that Never Fail”, a guide to dealing with loquacious writers, and “Woody’s Rule”, his cynical artist’s “motto” of: “Never draw what you can copy; never copy what you can trace; and never trace what you can cut out and paste up.”

His real legacy, though, is a bounty of eye-popping comic art, and hosts of wide-eyed young readers, many of whom became artists that carry his influence in their work.

When I was creating my webcomic, and needed a name for both the lead character and the comic itself, I took part of it from the Periodic Table and part from the Mad parody of Flash Gordon (black & white panel shown above) in which Wood did his comic turn on another of my favorite comics artists, Alex Raymond. Along with such Wood/Kurtzman classics as “Superduperman” and “Batboy and Ruben”, it’s a strip that has been burned into my cortex since I was 10.

There is no official Wally Wood site that I’m aware of. The main link here is to a fan site on Splash Pages. Here are some others: