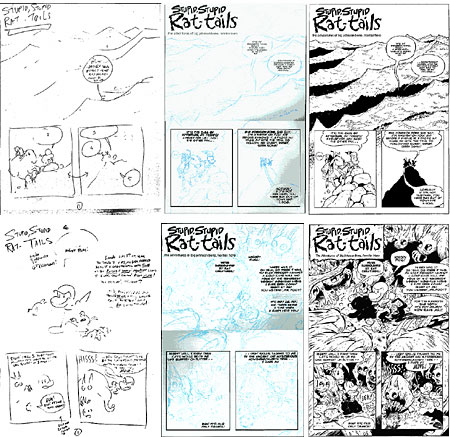 Jeff Smith’s Bone was one of the surprise comic delights of the ’90s and has continued to stand as one of the great single-artist comic series, running for over 50 issues from 1991 to 2004.

Smith managed to create a style, with influences from Walt Kelly, Carl Barks and other classic comic artists, that is perfect to portray his unique blend of innocence and sophistication and humor and adventure. He also has managed to incorporate divergent drawing styles in the same story (used brilliantly to portray different characters). His black and white comics are beautifully drawn, lovingly rendered and perfectly balanced, both in terms of the spotting of blacks and the overall composition of the pages.

Boneville, the official Jeff Smith/Bone site has numerous features about artwork in various stages for many of Smith’s projects, including Bone and Stupid Stupid Rat Tales, a Bone spin-off. In several cases, there are “making of” sequences that follow the creation of Bone pages from initial written script to thumbnail sketch to blueline pencils to finished inks.

There are also lots of other features on the site, including games, news and discussion boards and, best of all, a Library, where you can see many preview pages for Bone and other titles.

There is also an interactive version of Bone from Telltale Games, which has also been running he new Sam n’ Max comic as I mentioned back in December.

You can’t currently buy Bone albums from the official site, as they have cleared the decks in anticipation of the new full-color versions from Scholastic Press.

As much as I’m looking forward to the color versions, which are sure to be wonderful, I strongly recommend that if you haven’t seen Bone, you should go to your local comic shop or bookstore to pick up at least one volume of the story in glorious black and white. You can also still order the black and white versions from Amazon.

There is often a tendency to think of black and white comics as something of a “lesser form” or “incomplete” version, a subset of color comics, but I disagree. Black and white is a set of “colors” all to itself and Jeff Smith knows how to work with that palette like few contemporary comic artists.