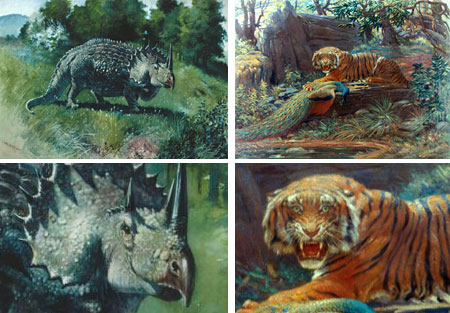 He began his study of art at an early age, taking classes at the Metropolitan Museum of Art in spite of the fact that he had been struck in the eye with a stone at the age of six and suffered from an astigmatism that together rendered him legally blind.

He was from a family that had a passion for the outdoors and soon carried his interest in drawing to the zoo, beginning a lifetime practice of drawing animals. He started his career as an professional artist working for a firm that decorated churches and gradually moved into illustration for magazines and children’s books.

His interest in animals led him to the American Museum of natural History, where his frequent visits were noticed by the museum’s scientists, one of whom, Dr. Jacob Wortman, asked him if he could draw a reconstruction of prehistoric mammal that resembled modern pigs.

Knight used his knowledge of modern animal musculature and surface anatomy to create a successful restoration that began his career as a paleontological reconstruction artist.

Working at a time when most fossils at the AMNH were kept in drawers and there were no dinosaur skeletons in the kind of dramatic display that we now expect of natural history museums, Knight worked with Henry Farifield Osborn and William Matthew to create displays of the animals in lifelike mountings.

The scientific accuracy of his reconstructions was up-to-date with scientific findings at the time, but the past changes quickly. Paleontology has made dramatic advances in recent years and Knight’s images of tyrannosaurs and triceratops with their tails dragging on the ground and apatosaurs (at the time called brontosaurs) wading in water to support their bulk are inaccurate in light of modern knowledge.

The power of his artwork remains, however, and Knight’s drawings, watercolors, oil paintings and large scale murals are still considered classics in the field and are still influential on subsequent generations of paleo artists. Knight absorbed influences from the art world around him, including the brilliant colors of Impressionism and the elegant compositions of Japanese art and brought a feeling of light, texture and life to his work that set high standards for everyone who was to follow.

There is an excellent website devoted to Knight, maintained by his granddaughter Rhoda Knight Kalt that includes a detailed bio, gallery and Knight related news. The American Museum of Natural History has an excellent online gallery of Knight’s work, even if the images are small.

Knight was featured as a character in the IMAX film T-rex: Back to the Cretaceous, and the historical graphic novel Bone Sharps, Cowboys and Thunder Lizards (more info here).

A previously unreleased autobiography, Charles R. Knight: Autobiography of an Artist (more info here), has been published, put together by an interesting team, including a forward by Ray Bradbury and Ray Harryhausen, an introduction by William Stout and illustrations by Mark Schultz (see my previous posts on William Stout and Mark Schultz). Stout, who is himself a dinosaur artist of note, has published three volumes of Charles R. Knight Sketchbooks (toward the bottom of that page).

In addition to his ground breaking and influential work as a paleo artist, Knight also continued to pursue his interest in painting modern animals, particularly tigers and other big cats. In fact, Knight may have thought of himself as simply a nature artist, portraying animals and plants, both contemporary and extinct, with equal aplomb.