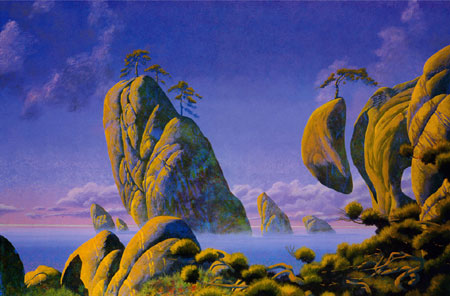 A few years before our wonderful digital art tools came into use, illustration lost one of its more prominent vehicles as LP records were replaced by digital audio CDs, and the golden age of album cover art drew to a close.

Yes, there is still nice work being done in CD cover design, but the glorious 12×12″ canvas of the LP record jacket was one of the most expansive areas an illustrator could have to work with, larger than most magazine covers, and its replacement was less than a fifth that size.

At the height of that wonderful period of album cover art, UK artist Roger Dean come to prominence as one of the most imaginative and popular artists working in the field. He did album covers for a number of bands, but is most closely linked with the progressive-rock band Yes. In fact, with the possible exception of the Pink Floyd covers designed by the Hipgnosis design studio, I can’t think of a more prominent association between a visual artist and a musician or group.

Dean’s work is often referred to as being surreal, but I’ve always thought of his imagined landscapes, with their muted colors, graceful curvilinear forms, wonderfully textured rocks and floating islands, as flights of fancy. I see little evidence of the psychological drama of true Surrealism. Dean, in fact, has said that he thinks of himself as a landscape painter.

Dean works primarily in watercolor and gouache and sometimes adds ink, crayon and even collage to achieve his effects of color and texture. There were two compilations of his work, now out of print but possibly available through eBay, Amazon or used book sites: Views, and Magnetic Storm. Dean has also released a number of calendars featuring his work over the years, the latest editions of which should still be available.

There are also several books on great album cover art including a series co-cuthored by Roger Dean; the first volume is Album Cover Album One (Album Cover Series) co-authored by Hipgnosis and Roger Dean.

Dean’s site has a store with prints and other items, including English Bone China mugs, (not your typical art reproduction mugs).

I’ve supplemented the link to Dean’s site below with an unofficial site that has larger reproductions of his work that give you a much better appreciation for his style, and in particular, his use of texture.

Like many artists, the gallery images on his official site are too small to give a real feeling for his work (meant to be reproduced nice and big on 12″ album covers, remember), perhaps with the thought that larger ones could be used for unauthorized reproduction.

However, as I often point out to artists who get overly concerned with image size and watermarks and other issues about preventing their images from being “stolen” off the web, if you have any images in print (you remember print, that other information technology), anyone with a $60 scanner can make higher resolution copies of your work than you’ll ever post to the web.

One Reply to “Roger Dean”