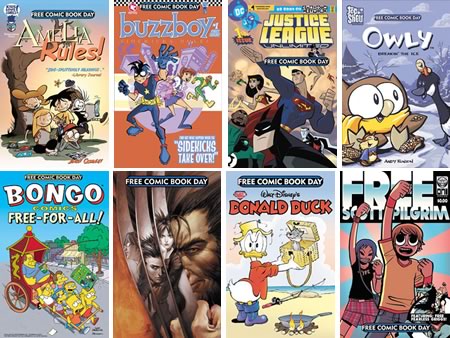 Update: This year’s Free Comic Book Day! is past, but you may still find this post worth reading, both for my suggestions for why comic books may be more interesting that you suspect, and my introduction to comic book specialty shops.

Here are some photos from the event at Captain Blue Hen in Delaware from the Draw! blog by Mike Manley, veteran comics and storyboard artist, who was one of the participating comics professionals.

If you don’t know much about comic books, and are even slightly curious but perhaps put off by the thought of being conspicuous in a small comic shop filled with geeky adolescents discussing the nuances of how batman’s cowl should fit his jaw, Saturday is your day to check out this whole comics phenomenon without feeling uncomfortable or out of place.

With the cooperation of comic book publishers, distributors, artists, writers, and comic book specialty shops across the country, Saturday, May 6th, 2006 is the 5th annual event offering free comics to all visitors at participating stores. The smarter, more involved shops will be doing their best to turn the occasion into a local media worthy event.

Publishers large and small are publishing special titles just for the event and many shops will be giving away additional titles as well. Everyone gets at least one free comic, sometimes more, depending on the shop and the number of people attending the event.

This is a great opportunity to visit a comic shop and see why so many people find this medium so fascinating. You can just wander around and look through the colorful titles and be dazzled at the array of drawings and colors, some of it horrible, much of it mediocre, but some of it absolutely wonderful (much like books, movies, music or any other medium of expression).

Why you should check out comic books

Movies and TV come at you at the speed the director sets; but in comics, like novels, you can read at your own pace, stop and contemplate, pick them up or put them down at will. Comics give you more visuals to work with than books, but leave more to your own imagination than movies. Best of all, the medium of comics is a synthesis of words and drawings that has its own language and method of expression, and can tell stories in ways no other medium can.

If you don’t know what to look at, ask the proprietor. Most comic shop owners are friendly and knowledgeable about comics and will understand if you say “I don’t like superheroes.” and will be able to recommend other options. Most shops will have many items beyond the usual superhero fare that most people associate with comic books in America. Look for wonderful reprints of classic newspaper comics and “graphic novels”, which are stories or collections in trade paperback format (which I feel is the best way to buy and read comics).

Ask about “independent” publishers or “small publishers”. The small publishers are where the most varied and interesting work is being done. The best shops will also have European comic albums and Japanese Manga (just a fancy word for Japanese comics) that will have very different stories and art than American comics.

Most specialty comics shops have a few common characteristics. Almost all of them will have rack of new comics, released during the current week, and most will have several racks of recent back issues from the previous few months, and then bins or boxes of older comics, often in plastic bags with cardboard backings, for the benefit of collectors. The back issues in bags are often marked up in price as collectables.

Browsing through anything not in plastic bags is usually fine. If it’s not, you’re in the wrong comic book shop. If you walk in and all of the comics are in plastic bags, including the new comics released this week, choose another shop. These shops treat comics more like collectable dolls than books to be read and enjoyed. However, they’re not as likely to participate in this event.

In the larger shops, there can be so many titles and genres that it can seem overwhelming. Don’t be reluctant to tell the proprietor that you don’t know anything about comics and are just curious. They will be delighted with your interest and more than happy to make helpful suggestions. Like good bookstore owners, they will also be happy to leave you to browse if that is your preference.

If you tell them what kind of books you like (drama, humor, mystery, romance, science fiction, historical novels), chances are they can recommend a comic book or trade paperback in a genre you like. If the shop has only superhero comics, try another before judging the medium by one experience. (Some smaller shops have such a limited budget, and/or imagination, that they only stock the best selling superhero titles and not much else; look for a larger shop.) Despite my recent rant about the dominance of superhero comics in the market, there are many alternatives out there (the Flight anthologies I mentioned in that same post are a prime example).

You’ll find a range of Free Comic Book Day participation at various shops. Captain Blue Hen Comics in Newark, Delaware is a shop in my area that goes all out for Free Comic Book Day, with signings by comics artists and writers, door prizes and events, costumed characters, charitable contributions, reciprocal promotion with the local library (present your library card an get an additional free comic, contribute 50 cents to the library restoration fund and get another), and more. It’s practically a town fair in itself.

Checking out comics is also sometimes a way to stumble across very unique stores. I buy my comics at a store in Delaware called Between Books, that features a remarkable combination of comics, graphic novels, science fiction, fantasy, horror and mystery books, adventure gaming, animated videos, manga, anime and a range of art books and children’s books hand picked by the owner. I would never have even known such a unique place existed had I not been curious about comics.

You won’t know what you’re missing until you check it out, and what better time to do that than Free Comic Book Day? At the very least, drop by and pick your your free comic book. Why not?