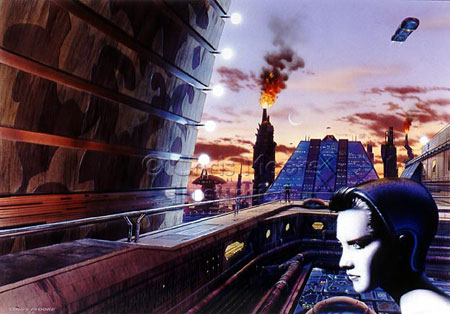 Clarity is something we all hope for when thinking about the future. Clarity is also an ideal that some artists, notably science fiction artists, strive for when depicting the future. Chris Moore is a British illustrator whose visions of other words and other times are focused to razor sharpness.

His sci-fi work has a refined, high-tech intricacy and often depicts vistas of the future on a grand scale, utilizing a fine command of atmospheric perspective. He also has a knack for portraying robots that display both subtle and not-so-subtle human characteristics.

He works in both traditional media, usually acrylics, and digitally, though his style across the two types of media is quite consistent.

Moore has illustrated major science fiction novels by greats like Phillip K. Dick and Alfred Bester. He has also done album covers for performers like Fleetwood mac, Journey and The Allman Brothers band, as well as lesser known but terrific bands like Pentangle and Lindisfarne.

Although not a major direction in his career, Moore has done film concept work for George Lucas and Stanley Kubrick.

There is a book on his work and technique, published in 2000, Journeyman: the Art of Chris Moore. He is also featured in Fantasy Art Masters: The Best Fantasy and Science Fiction Artists Show How They Work by Dick Jude which includes a number of his preliminary sketches and the finished works they correspond to.

His online gallery also includes still lifes, portraits and landscapes. Unfortunately your enjoyment of the images will be slightly marred by the fact that Moore has felt it necessary to watermark the images. The effect is not overwhelming, however and some of the images survive better than others, depending on where the mark lies across lighter areas of the image.

On the plus side, the large images are good sized and allow you to get some idea of the wonderful detail and scale in Moore’s work. If you get the chance to see his work in books, or even better in person, as I did at an exhibit of sic-fi art at Weidner University several years ago, you will see clearly that he is one of the best in the field.

Addendum: Jane Frank’s Wow-Art.com site has Chris Moore original art for sale. Use the “Search by Artist” feature in the left column.

One Reply to “Chris Moore”