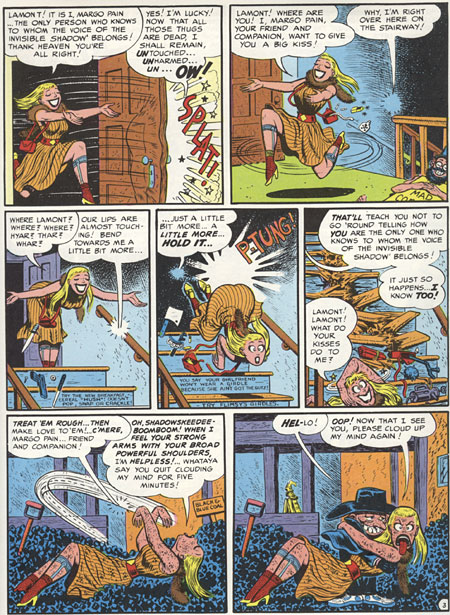 It’s tempting to think of the comics art form as being most closely related to illustration. It is composed, after all, of drawn images. In reality it is much closer to its celluloid and electronic relatives, film and television. This is not because of the cross-over combination of animated cartoons, but because of the more direct relationship of mediums made up of images in sequence (moving or not) that tell a story.

In this context, good comics artists fill multiple roles as directors, cinematographers and actors, composing a scene, framing it and then acting it out. In their role as actors, comics artists must convey in their drawings of the characters the body language, expressions, movements and gestures that live actors naturally possess.

You will even find comics artists who act out a scene before drawing it. When creating comics myself, I would often be drawing quietly only to have my wife walk into the room and burst out laughing, reacting to the fact that. without realizing it, I was grimacing wildly as I unconsciously made the facial expressions I was trying to draw.

If comics artists are the actors of this medium, Will Elder is its comic genius, the Buster Keaton and Charlie Chaplin of the comics story.

There are many comics artists who draw humorous stories or daily strips, but Will (sometimes “Bill”) Elder’s drawings can send me rolling even without words. His hilariously exaggerated drawings have most often been teamed with the brilliant comic writing of Harvey Kurtzman. Together they are a one-two knockout punch to the funny bone.

I first encountered Elder’s wonderfully twisted, and fantastically expressive comics in paperback reprints of the E.C. Mad comics from the early 1950’s. (See my post on Wally Wood, and my description of why I started lines and colors and why I started to draw comics as a kid.) Though I was more taken with Wood as an artist, it was Elder whose hilariously exaggerated character positions, wild expressions and manic actions made me laugh the most.

Kurtzman and Elder delighted in the comical destruction of classic comic strips, movies, books and cultural icons of all kinds. Along with Wally Wood, Jack Davis and John Severin, they produced some of the funniest and most brilliantly drawn humor comics ever created.

In addition to adding his outlandishly loopy drawing style and comedic “acting” talents to the work, Elder would fill the backgrounds of his panels with dozens of amazing little sight gags. If Elder’s drawings and Kurtzman’s writing weren’t enough to turn my impressionable little mind into radioactive gook, these just put me over the top.

Elder’s panels filled with sight gags also laid the groundwork for the other Mad artists to follow, and even suggesting the “stuff in as many gags as you can” approach later seen in movies like Airplane and Blazing Saddles. Note in the image above from Elder and Kurtzman’s parody of The Shadow, the items falling out of Margo’s purse, the objects lying on the stairs and the gags written on the risers of the steps, as well as the totally incidental character added to the second panel.

Elder also did commercial illustration for a number of mainstream publications like The Saturday Evening Post and more straightforward comics for E.C. titles like Front Line Combat and Two-Fisted Tales, but it was in the humor comics of Mad, Humbug, Help and Hugh Hefner’s Trump, that Elder really shined. It was Elder, in fact, who did the first rendition of Mad’s toothy idiot Alfred E. Neuman, who illustrators Kelly Freas and Norman Mingo would take and develop into the character as we know and love him. 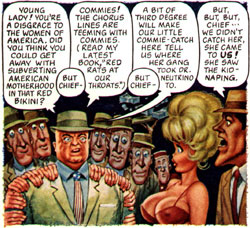 Kurtzman and Elder continued their comic partnership when Hefner offered them a slot for a humor comic in Playboy. They essentially took their Goodman Beaver character, a wonderfully snide take-off of the wholesome Archie comics, reworked the concept as a humorously naive, chaste but exaggeratedly sexy woman in a sex-themed parody of Little Orphan Annie and created Little Annie Fanny.

At Hefner’s urging, Elder developed a unique watercolor and tempera approach for the comic, without the traditional black outlines to hold the color, instead using fullly developed, highly rendered forms, much more like magazine illustration than comics. This, as far as I know, was the first real example of “painted” comics, a format now being successfully popularized by Alex Ross and others. Elder was occasionally assisted on the strip by veteran comics artists Russ Heath, Larry Siegel and the amazing Frank Frazetta, as well as several Mad artists including Al Jaffee and the great Jack Davis.

Elder’s official site has been pared down to just books and prints. There is an article and interview on Mad Mumblings, and an interview from The Comics Journal.

A good tribute book was recently published: Will Elder: The MAD Playboy of Art (with Daniel Clowes), and look for Chicken Fat: Drawings, Sketches, Cartoons and Doodles.

There are also reprints of some of his best Mad work in “Mad About the Fifties, and the terrific “Mad Reader” black and white paperback reprint series that originally detonated the cartooning bomb in my own adolescent brain: The Mad Reader , Mad Strikes Back, Inside Mad, Utterly Mad and Brothers Mad. There you can see Elder’s wild, brazen, hyper and sublime drawings in all of their brain-exploding glory.

If there was an Oscar for comedic acting in comics, the lifetime achievement award would go to Will Elder.

3 Replies to “Will Elder”