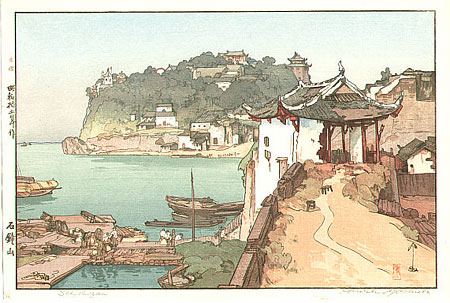 Hiroshi Yoshida devoted the first part of his career to painting. In his late 40’s he moved into woodblock printing and became one of the major artists of the “shin hanga” (“new print”) movement.

Yoshida was one of the first major woodblock printers in Japan to step outside the traditional separation of skills in which wood block prints were designed by artists but carved and printed by separate printing studios, by establishing his own studio of carvers and printers who worked under his close supervision.

Yoshida’s quietly beautiful landscapes are composed of delicate linework enlivened with soft but somehow vivid colors. Like many Japanese printmakers, he suggests even more than he shows, and his deceptively simple images carry an uncanny emotional resonance.

Like his contemporary Kawase Hasui, who I profiled back in January, Yoshida had superb control over atmospheric perspective and excelled at the depiction of light and reflections on the surface of water.

Also like Hasui, Yoshida traveled extensively on sketching expeditions, although Yoshida’s travels extended well outside Japan to North America, Europe, North Africa, India and other parts of Asia. His images display a broad range of subjects not normally encountered in Japanese prints, including places more familiar to western eyes like Yosemite and Niagra Falls, perhaps helping those of us with an untrained eye to differentiate style from subject.

As a result of his travels Yoshida also was exposed to influences of stye from western art that he subtly incorporated into his own unique style.

The Hanga Gallery includes more prints from European and North American subjects than the Artlino Art Auctions, but the latter features larger scale images of his work (click on the image for an enlargement), which I highly recommend.

In either case, I hope you can set aside some time to spend with Yoshida’s sublime images. Like many aspects of arts from Japan and other parts of eastern Asia, I find that contemplation is rewarded.