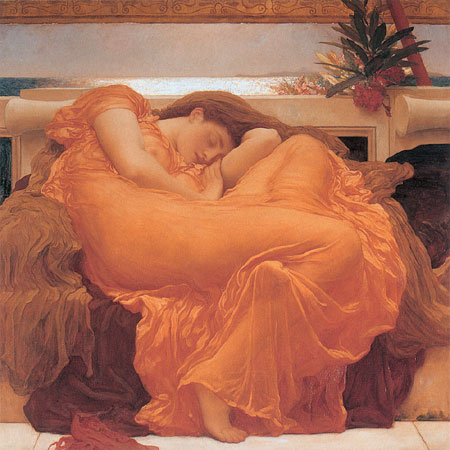 Frederick Lord Leighton (not to be confused with Edmund Blair Leighton, who I profiled last week), was one of the most influential of all Victorian Academic painters.

He was very much within the academic neoclassical tradition, in contrast to the painters of that time who were favored in retrospect by the 20th century art establishment, and were remembered primarily for their rejection of that tradition. For much of the 20th Century, art historians and critics considered rejection of 19th Century Academic art a badge of honor, because Academic art was the “bad”, “repressive” art from which the modern art movements “liberated” us.

I’ll resist going into a big rant about what a poisonous attitude this overt rejection of tradition by the modernist establishment was. I like a lot of modern painting, but I have nothing good to say about the concerted campaign the modernists waged to discredit figurative art when they came to dominate the art establishment. I’ll just say that I enjoy Academic art and, in spite of the formality and absence of emotion in much neoclassical painting, I would rather spend my time in front of one of Leighton’s beautifully executed canvasses than a museum full of late 20th Century “isms”, which were bred from another kind of formality and dearth of emotion. (OK, so I did rant, but it wasn’t a big rant.)

Leighton was closely tied to the Royal Academy, exhibited most of his major works there and was elected its president in 1878. He painted with the emphasis on draughtsmanship and elegant rendering that was fundamental to the neoclassical style, and his subject matter was mostly scenes from ancient history, mythology or the Bible. Unlike some of the weaker Academic painters who got caught up in the mere visual reconstruction of those times or subjects, Leighton was faithful to the original vision of neo-classical art and the pursuit of timeless beauty.

Leighton’s early work was influenced by the Pre-Raphaelites and he shared their literary subject matter, painting scenes from Shakespeare and Dante, but he moved into more classical subjects as he travelled and was exposed to contemporary French and Italian Classical art.

As a mature artist, Leighton was so influential among Victorian Classical painters that Edward Burne-Jones, himself one of the great figures of Victorian art, nicknamed him “Jupiter Olympus”.