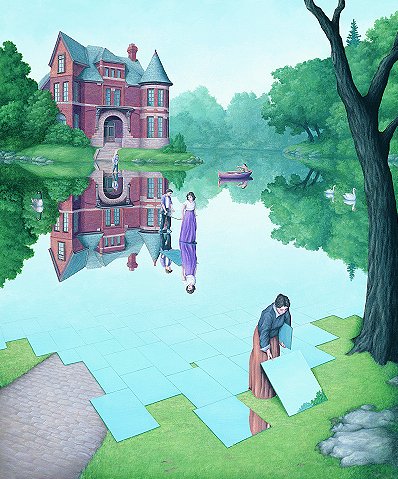 Rob Gonsalves is fascinated with the twilight zone between worlds.

The Canadian artist creates crisp, detailed acrylic paintings that walk that boundary by simultaneously representing both worlds, and the seemingly impossible connection between them, in the same image.

In pursuing this he walks a shifting path himself, between the hauntingly connected juxtapositions of Magritte and the inverted logical constructs of M.C. Escher.

You will see people casually refer to his work as surreal, but I think it would be more correct to use the term “Magic Realism”, simply because Surrealism relies on images from the subconscious and Gonsalves works are much closer in intention to Escher’s carefully constructed excursions into the nature of perception and thought.

As you explore his work, you’ll see several themes that Gonsalves likes to return to and investigate repeatedly, much like Monet painting the same haystack multiple times.

The largest group consists of the merging of worlds of differing scale, a series of elaborate variations on a theme first explored by Escher in a woodcut that is one of my favorites of his, Still Life snd Street.

The other large theme is that of the blending of two worlds by similarities of repeated shape, again a favorite theme of Escher, but explored by Gonsalves in paintings that allow for the effects of color and atmosphere to carry some of the transition between the perceived realities.

Gonsalves’ ability to carry off these transitions is so effective that it’s often difficult to pin down exactly where in the image your mind makes the mental shift from one point of view to the other.

He explores other, smaller themes that lean more toward Magritte’s colorful collisions of realities. Among my favorites are Gonsalves’ wonderful images of what appear to be bodies of water in the distance that are revealed to be mirrored tiles in the foreground.

There are two volumes of Gonsalves’ work, accompanied by lyrical text and aimed at children. One is night-themed, Imagine A Night, the other, Imagine a Day, features daylight images and has text by Sarah L. Thompson.

Take some time and let Rob Gonsalves walk you along that shifting path where the boundaries of “here” and “there” shimmer and change with the merest movement of an eye.