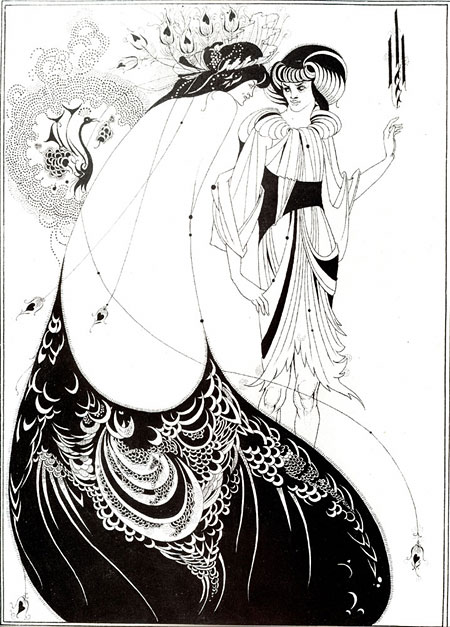 For an artist intimately fascinated with line, Aubrey Beardsley walked many of them himself. He walked a line between sickness and health, suffering from tuberculosis as a child and facing repeated bouts of ill-health before succumbing to it at the age of 25.

His ink drawings, illustrations and prints walked the line between drawing, design and decoration, going beyond even Mucha in this respect.

He balanced large areas of solid black and areas of open white with areas of intricate detail. His large shapes were often delineated with graceful sweeping curves; and the design of the elements and decoration of the surface were often more important than the illustrative qualities. He was obviously influenced by the decorative and design characteristics of the Chinese and Japanese prints that were becoming popular in Europe at the time.

Beardsley walked a line between fame and notoriety. His work was both admired and reviled. His images broke the rules of perspective and proportion; and his subject matter, often of a darkly fantastic and overtly sexual nature, broke the rules of propriety.

There is also some question about Beardsley crossing lines of sexuality and morality. On one hand he is supposed to have been part of the largely homosexual circle of Oscar Wilde and others associated with English Aestheticism, on the other hand he is rumored to have had an incestuous relationship with his older sister. His work and actions stirred up controversy both during and after his lifetime.

Beardsley drew from an early age but did not pursue art as a career at first. He was working at an insurance company in London and drawing in his off hours when he showed his work to Edward Burne-Jones, a Pre-Raphaelite artist who was a major influence on his style, who reportedly told him: “I seldom or never advise anyone to take up art as a profession, but in your case I can do nothing else.”

His work has been very influential on other artists, notably the poster art of the 1890’s, the late Art Nouveau artists, the Symbolists, illustrators like Edmund Dulac and Kay Nielsen; and the psychedelic poster and underground comics artists of the 1960’s.

Whatever we make of the lines Beardsley crossed as a person or as an artist, the lines he left on paper still have the power to shock and enthrall.