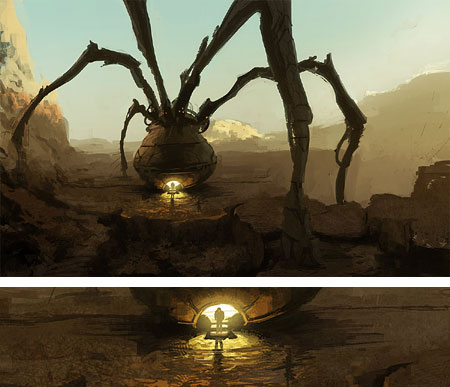 One of the interesting approaches to developing a style and warming up for larger projects that is common among digital painters, particularly those involved in concept design, is the practice of “speed painting”.

The immediacy, absence of concerns with drying time and absorption of traditional materials, the ability to change brush sizes almost instantly and access to unlimited amounts of color, make it possible to apply colors to an image extremely rapidly. Concept designers and other digital painters will often practice or warm up with these very quickly rendered scenes, and sometimes engage in friendly rivalries to see who can make the most striking image in a limited amount of time.

Mathias Verhasselt is a French digital painter, illustrator, concept designer and 3-D modeler based in Paris. His web site and gallery at the Computer Graphics Society feature both examples of his speed painting and his more finished work. He creates his 2-D work in Photoshop and his images of high-tech vehicles, planes, robots and fantastic environments contrast with more naturalistic scenes of ancient battlefields and warriors.

His galleries also include some of his 3-D modeling as well as images that combine the two disciplines.

Much of his work has a fun, loose quality the speaks of the freedom and lack of restrictions many artists find so appealing in digital painting.