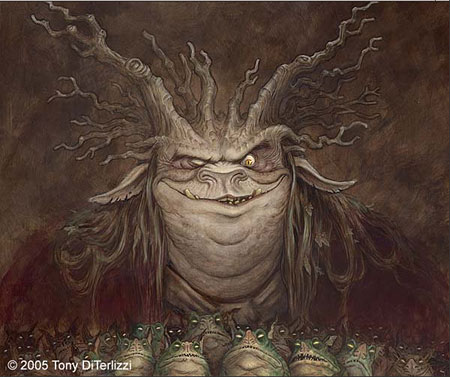 Like any artists, illustrators must choose where their work will “live” on the spectrum of styles and genres. Toni DiTerlizzi lives somewhere between adventure fantasy and children’s book whimsey, where dragons and fairies meet spiders and flies and giant pink rabbit-eared creatures appear in kids’ bedrooms. His work shows the influence of some of the classic children’s book illustrators like Arthur Rackham and perhaps John Bauer.

After working in gaming and fantasy for a number of years, DiTerlizzi moved into children’s books, writing and drawing his own titles, Jimmy Zangwow’s Out-of-this-World Moon Pie Adventure and Ted, as well as illustrating the work of other authors including the Alien and Possum series by Tony Johnson and the Ribbiting Tales collection.

In 2003 he co-created with Holly Black The Spiderwick Chronicles, revisited in 2005 with Arthur Spiderwick’s Field Guide to the Fantastical World Around You.

DiTerlizzi’s site got a major makeover several months ago, reappearing as a spiffed-up Flash version with gallery drawers, video clips, animated hearers and a nice looking interface. Personally, I preferred the older, less polished version because I thought it was easier to see his artwork.

The new site still has plenty of DiTerlizzi’s charming artwork, however, both in galleries and as downloadable wallpaper. He works in watercolor, pastel and, by my guess, gouache and other mixed media as well. Some of the gallery selections include preliminary sketches and pencil drawings of his illustrations.