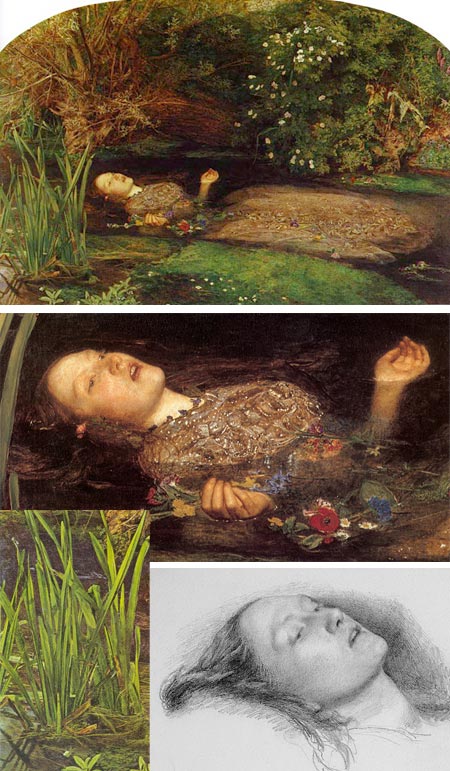 There is a willow grows aslant a brook,
That shows his hoar leaves in the glassy stream.
There with fantastic garlands did she come
Of crow-flowers, nettles, daisies, and long purples
(…)
When down her weedy trophies and herself
Fell in the weeping brook. Her clothes spread wide,
And, mermaid-like, awhile they bore her up;
–Hamlet, Act IV, Scene VII

Such is the description by the Queen of sweet, mad Ophelia’s suicide, a key scene in one of Shakespeare’s most powerful plays, and thus a perfect subject for the brush of Pre-Raphaelite master Sir John Everett Millais.

Opheila is one of the most fascinating of Shakespeare’s tragic characters. There are web sites devoted to her, organizations named for her, and many artists painted her, including other Victorian masters like John William Waterhouse (image at right in my post on Waterhouse, another version here).

Of all the depictions of her that exist, it is Millais’ striking image of Ophelia’s tragic, floating form that we remember, her beautiful face turned to heaven as if just relinquishing her spirit, and her delicate, upturned hands gone limp, releasing their grip on the earthly blossoms.

Millais, along with William Holman Hunt and Dante Gabriel Rosetti, was one of the founding members of the Pre-Raphaelite Brotherhood. True to the aims of the Brotherhood, Millais painted Ophelia’s surroundings with an an almost fanatical devotion to the true representation of nature; his plants could be used as botanical studies (high res version of Ophellia here).

Ophelia herself was modeled on Elizabeth Siddal (study at bottom), who would eventually become Dante Gabriel Rosetti’s wife and was a frequent model for several of the Pre-Raphaelite painters. She posed in a bathtub full of water for weeks on end while Millais painted Ophelia, which eventually led to an illness from which she never fully recovered.

The members of the Brotherhood were devoted to the accurate depiction of nature within the context of their literary themed paintings, in contrast to the Academic Classicism of the time. They also rejected the Academic practice of painting on dark grounds, Millais and Holman-Hunt in particular developed a method of working color directly into a wet white ground to give their work a brilliance of color for which it is treasured today (by art lovers, not by critics, most of whom still follow the modernist doctrine of denigrating any art with a “literary” component).

Millais was also an illustrator (another “sin” to modernist critics), and in his paintings often interpreted the work of Shakespeare. He made an artistic break with the Pre-Raphaelite Brotherhood itself when he moved away from the tight detail they, and their critical defender John Ruskin, admired, saying he could no longer afford to spend a whole day painting an area “no larger than a five shilling piece”. This was after he had married Ruskin’s former wife Effie and had eight children with her in short succession. Juicy details can be found in the Millais bio on Art Renewal Center.

Millais was elected President of the Royal Academy of Arts when Frederic Lord Leighton died even though Millais was quite ill at the time and lived only a year after.

Even though Millais is under-represented in the wondeful Pre-Raphaelite collection of the Delaware Art Museum (two exquisite but small oils), I had a reproduction of Ophelia on my apartment wall while I was an art student, sometimes rotated with an image of his painting of Mariana in the Moated Grange.

The collection is still traveling, by the way (I’m really beginning to miss it) and is currently at the Philbrook Museum of Art in Tulsa, OK. Millais’s Ophelia, alas, is not among that superb collection’s treasures, but the spirit of the Pre-Raphaelite art that it exemplifies is certainly there in other works, rich with color and fidelity to nature.

Ophelia is still one of the most powerful Pre-Raphaelite works. It is striking that an image of tragic death should be so rich with color and life.

Link: Millais' Ophelia a the Tate Gallery London (where it resides)
Millais at the Royal Academy of Arts Collection (many drawings)
Millais at Art Renewal Center
Millais bio and small reproductions at Victorian Art in Britain
Millais at Olga's Gallery
Millais at CGFA
Millais at Artcyclopedia (links to other online galleries)