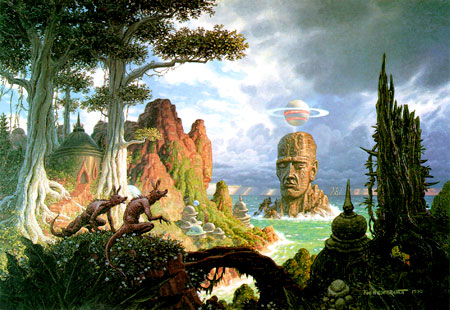 It’s difficult to separate the work of fantasy and science fiction artist Tim Hildebrandt from that of his brother Greg. For the greater part of their careers they have collaborated on most of their work.

Word has gone around the web that Tim Hildebrandt died Sunday (June 11) at the age of 67 of complications from diabetes.

The Brothers Hildebrandt, as they are often referred to, have done book, magazine, game, card and calendar illustrations that are some of the most widely known in the fantasy art field. Before Peter Jackson’s movies cemented the “look” of the world and characters of Tolkien’s Lord of the Rings, the Hildebrandts created one of the more widely known visual interpretations of Tolkien’s work with their calendar illustrations in the 1970’s. They also created widely distributed illustrations for collectable cards of Star Wars themes and Marvel Comics superheroes.

Their work together was often brash, bold, in-your-face and exaggeratedly colorful. They would frequently employ the technique of juxtaposing brilliant complementary colors on the same face or figure in areas of backlighting or secondary highlights to increase the visual drama and “push” the color. (Complementary colors, such as blue and orange, are actually the inverse of one another. If you stare at a patch of light blue for 30 seconds and close your eyes or look at a white sheet, you will see orange. Many artists and illustrators know that this process is constantly occurring when you perceive colors, and the placement of a color next to its compliment will exaggerate the intensity of both colors. This is the basis of much “op art” and is particularly common in fantasy and science fiction art and comic books.)

The two brothers did go their separate ways at times. Of the two I think that Tim was perhaps more inclined to subtlety. He did a lot of science fiction illustration in which the color range was a bit more muted and atmospheric. Both brothers have been prolific and there is a good deal of their work available in books, calendars and posters.

The official Brothers Hildebrandt site has some good images. Unfortunately, a large number of them are defaced by the overzealous application of watermarking. (When will people realize that they can’t “protect” an image by limiting its size or watermarking it on the web? If the image is in print, anyone with a scanner can produce a higher-resolution version than anything you’re likely to post on the web.)

If you find the watermarking as frustrating as I do, you may want to simply do a Google image search to turn up images like the one above (larger version here), but if you’re looking for printed versions, make sure they’re the approved versions from which profit is actually going to the artists or their families.