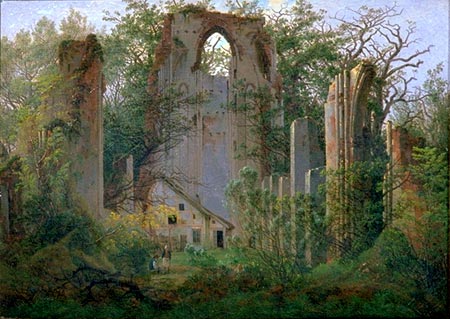 Friedrich attempted to create Christian religious art without the traditional biblical scenes, instead using allegorical landscape to convey religious themes. In spite of its message of Christian redemption, his work is steeped in loneliness, isolation and desolation, perhaps because of tragedy in childhood. He witnessed his brother drowning in the Baltic after falling through thin ice while attempting to rescue him from the same fate, his mother died when he was 7 and two of his sisters died by the time he was 18.

His fascination with ruins of churches, graveyards, shipwrecks, isolated individuals among hauntingly portrayed landscapes and mist enshrouded planes populated by bare trees made him a favorite of the Surrealists, who saw him as a visionary painter.

Similarly, he had a great impact on Symbolist painters like Arnold Böcklin, whose own tragic life and fascination with death undoubtedly found resonance in Friedrich’s silent stones and “haunted, frightened trees” (to borrow a wonderfully appropriate line from Bob Dylan).

Friedrich started his career doing sepia ink and wash drawings of landscapes; he didn’t take up oil painting until he was 30. In the course of his career he became one of the masters of romantic landscape painting along with Turner and Constable. Toward the end of his life he was crippled by a stroke and, unable to paint in oil, he returned to sepia drawings.

Unfortunately, some of his work was lost, both to fire and to the Allied bombing of Dresden in World War II. We have only photographic records, mostly in black and white, of some of his masterworks, although some have been colorized by modern artists in an attempt to reconstruct their original appearance.